Greg Oldenburg doesn’t yet have any detailed plans for turning Sudbury’s former Northern Breweries building into a residential complex, but he’s already received commitments for 15 of his 50 planned units.
0
Nov 20, 2014 7:55 PM By: Lindsay Kelly 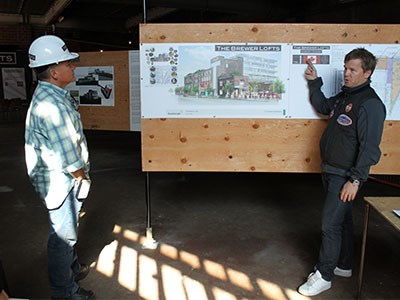 Greg Oldenburg (right) spoke to prospective buyers during an open house at Northern Breweries in downtown Sudbury. The developer plans to transform the former manufacturing facility into a residential complex with 50 loft-style units.

Greg Oldenburg doesn’t yet have any detailed plans for turning Sudbury’s former Northern Breweries building into a residential complex, but he’s already received commitments for 15 of his 50 planned units. Such is the lure behind the notion of living in a former brewery.

Built in 1907, the structure has remained vacant since 2004 when Northern Breweries closed its doors for good. But the bones are strong, Oldenburg said, and the unique qualities of the building make it an ideal candidate for this type of development.

“There won’t be another one,” he said. “There’s no other building in this city to its equal.”

Oldenburg envisions The Brewer Lofts as home to trendy, loft-style apartments that hearken back to the city’s industrial roots: exposed brick, high ceilings, and black and nickel trim will be standard. There will also be room for event space, indoor parking, an art gallery, a fitness facility and more.

Similar projects in Milwaukee or San Francisco that repurposed former manufacturing facilities serve as inspiration for the developer.

“I think there’s lots of precedent for this type of project,” he said. “If you take a look around Ontario and the U.S. at other industrial cities that have had their manufacturing base moved to more modern facilities…what we’re doing here isn’t any different.”

Originally from Sudbury, Oldenburg got the idea for the project while driving through the city last September. Emblematic of the city’s industrial underpinnings, the building inspired Oldenburg to start thinking of how he could revitalize the structure and the neighbourhood.

Though not trained in architecture, Oldenburg grew up in a home that valued art and design; his father, a draftsman by trade, taught at Nickel District and Lasalle Secondary schools. Now a resident of Toronto, Oldenburg has worked in corporate communications, with exhibit builders and for a fabrication company.

“Primarily, I can visualize 3D spaces quite quickly,” he said. “I’ve worked with some of the best architects and interior designers in the world on a variety of projects that are quite complicated, and so I’m just trying to apply that experience together with what I see, and that’s where it led me back to this property.”

Oldenburg has called in a team of experts to consult on the project. Quadrangle Architects of Toronto has been retained for the design of the building, while Sudbury’s Tribury Construction has been hired on as the contractor. Freed Development, also of Toronto, is lending its development expertise to the venture.

Project plans call for the demolition of one portion of the facility, to be replaced by a modern addition. And Oldenburg is aiming to close down a portion of one street to carry the development over to an adjacent parcel of land and engage with the residential neighbourhood already established.

“There’s a real desire and want to connect with the neighbourhood,” he said.

Construction costs have been pegged at a minimum $12 million, but that doesn’t include hiring the architects, engineers and lawyers, or permitting fees. Oldenburg maintains it’s still a great deal, and a number of factors converged to make the project feasible.

The price of the property, which had sat vacant since 2005, was reasonable. The area in which the brewery is located is exempt from development charges, thanks to an expansion of the area approved by the city last spring. The project qualifies for assistance under Sudbury’s much-lauded Brownfield Strategy and Community Improvement Plan. And Oldenburg’s only required to apply for rezoning; allowances in the Official Plan already permit mixed-use residential development on the property.

Overall, there isn’t a prohibitive amount of remediation required.

“There’s not a whole lot there to be concerned about, and that’s why we’re going forward,” Oldenburg said. “If there was something really bad, wouldn’t have gone ahead.”

Financing still needs to be put in place, and Oldenburg said he’ll continue to drum up interest in the project. His target market is young professionals, retirees, and empty nesters who want to take advantage of the nearby amenities, while eschewing the maintenance required with a single-family home.

“It’s a matter of simplicity, I think,” Oldenburg said. “I think, for a lot of people, they want to be in a place that starts to simplify their life where they don’t have to worry about mowing or shovelling, but they still want the ability to have outdoor space and recreational space where they live.”

Oldenburg was encouraged by a June meeting with representatives of the Greater Sudbury Economic Development Corp., Downtown Village Development Corp., Quadrangle Architects and the city. He plans to have his zoning application in to the city during the first quarter of 2015 and anticipates opening a sales office before the end of the year.

If all goes according to plan, construction could start by next fall and the anticipated move-in date is 2017 — the year of the building’s 110th birthday.