When it comes to construction in the North, Jib Turner is asking builders and developers to consider light-gauge steel as a viable alternative to wood.
0
Oct 29, 2013 1:11 PM By: Lindsay Kelly 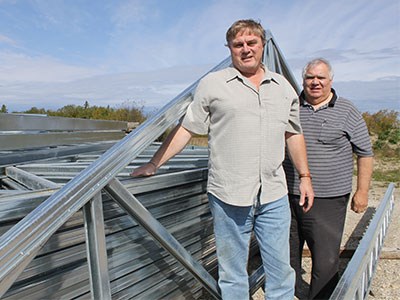 When it comes to construction in the North, Jib Turner is asking builders and developers to consider light-gauge steel as a viable alternative to wood.

Since April, Turner, his partner, Frank LaCrosse, and their team of five have been manufacturing light- gauge steel building components from their 7,000-square-foot plant in Little Current on Manitoulin Island. Built in Canada, the steel-roll forming machine can process up to 9,000 feet of flat steel per hour, enough material to supply 10 houses.

The Northern Ontario Heritage Fund chipped in $125,000 for the purchase of equipment, which makes roof trusses, floor trusses, wall panels and curtain walls.

“They have machines like this that come from China and they’re not nearly as tough,” Turner said. “They’re built very cheaply and they cost a lot more to run, so we’re really lucky to get it.”

Northern Metal Framing is targeting land developers and commercial and industrial builders who are looking for a lightweight, non-combustible and cheaper option to wood. Steel framing requires fewer people to install, requires less material, and can be used in buildings higher than six stories.

The cost is up to 20 per cent cheaper than a building using wood.

Complementing that part of the business is the modular home construction division, which is concentrated on affordable housing for seniors and onand off-reserve First Nations residents. Building components are constructed separately and then pieced together on-site.

Two homes have already been erected in Little Current and components for another two await shipment to nearby Espanola. An average 980-square-foot home featuring three bedrooms and one bathroom retails for $189,000 and can be heated for less than $100 a month.

“For retirement, it’s perfect,” Turner said. “It’s on one level, and there are no steps.”

Steel components also travel well, he added, so they’re ideal for shipping to communities in the far north, which have notoriously had problems with illness and deterioration due to mould.

Hailing from a prominent Manitoulin Island family, which established itself on the Island more than a century ago, Turner is the current proprietor at Turners’ of Little Current department store.

A lifelong builder and inventor, it was while working as a consultant with a U.S. company that LaCrosse got involved in the light-gauge steel industry.

One of the company’s distributors, MiTek, set him up with a challenge.

“As soon as they looked at my building background, because they are the largest truss producer in the world, they wanted me to prove that steel trusses wouldn’t work,” said LaCrosse, Northern Metal’s vice-president.

He did, and then found a way to make them work, developing a prototype of the cold-forming machinery.

Since then, he’s built hotels, homes and condo projects with light-gauge steel, but it’s been a 25-year battle convincing the wood-loving Canadian building industry that steel is a desirable construction material.

“It’s like everything else with tradition,” LaCrosse said. “It’s very hard to change.” All light-gauge steel used in building in the North currently comes from Mississauga, LaCrosse said, but he believes Northern Metal Framing can grab a big chunk of that business.

“The market for steel framing is pretty big,” LaCrosse said. “It’s only touched about 2 per cent of the market.”

The partners currently employ five, but LaCrosse said they could use 20 workers, and they’re already planning to expand the plant to nearly triple its shop space.

“We want to put a bigger modular house plant in,” Turner said. “Right now, we can build modular here in this plant, but we want to put an assembly line plant in. It would require 20,000 square feet.”

Plans are also in the works to construct four eight-plex apartment buildings in Little Current, where there’s a need for rental properties. A priority will be educating the public on the benefits of steel- framed housing and the company will start a marketing campaign across the North this fall.

“Certainly, in the markets that are looking at a new type of construction, this what they go to,” Turner said, “and we really think we have a terrific product to sell the North.”