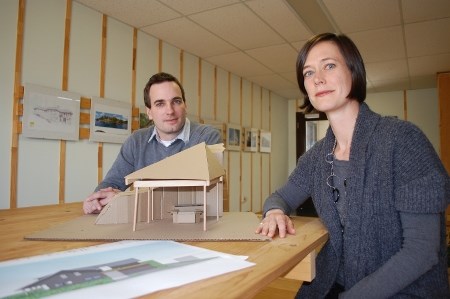 Matt and Brenda Ryan are branching out their scope from designing dream homes and cottage renos to commercial and multi-residential projects.

Both Matt and his wife/business partner, Brenda, studied in Finland and have incorporated those European influences into their design firm's body of work.

"One thing I'm drawn to is the landscape,” said Matt, “and the (Finnish) topography is very similar to here, with the rock, water and trees."

“But there's an honesty about the (building) materials and not a lot of gratuitous detail or decorative, it's straightforward simple.”

That blends perfectly with the traditional and basic "bunky" cottages of Georgian Bay architecture of wood frame construction and exposed rafters.

The transplanted Torontonians began designing dream homes and cottages but now are branching out into more commercial projects and multi-residential projects.

Their work includes renovations at Kropf Industries, interior design at Kawartha Credit Union, as well as additions at restaurants and a local baptist church.

One of their signature pieces is the Sail Parry Sound waterfront centre as part of a redevelopment of an old abandoned wharf into a sailing school.

They are currently working on a condominium development proposal by Distler Construction in Parry Sound.

An added element at FAD Architects is Matt's knowledge of furniture design having studied at Ontario College of Art.

The couple, now in their 30s, first met in the same class at the University of Waterloo's School of Architecture and Environmental Studies.

Matt, native of Harrow, outside Windsor, and the London-raised Brenda, moved to Toronto for five years after graduation before deciding to head north to Parry Sound in 2002.

"There weren't any other architects in town and we decided let's start our own practice,” said Brenda.

They had some familiarity with the area. Matt's parents bought cottage property on Mill Lake over a decade ago.

“We thought we not take a chance? Let's move up here and build our house, and see what happens,” said Brenda.

The ease of traveling on the new four lanes of Highway 69-400 was a big incentive to make the move while also allowing them to stay in touch with their Toronto clients who have nearby vacation properties.

"We're seeing a trend especially now with the economy toward people wanting to keep what they have and add on,” said Brenda, with bungalow expansions to accommodate a growing family.

Cottagers leaning toward retirement are looking to make their weekend homes more year-round.

"Everyone wants the option of coming up in the winter time,” said Matt.

The first conversation with a client involves asking them how they see themselves living on the site in order to gain a deeper understanding of the space.

"Usually everyone has an idea of what they want to do," said Matt. "They just don't know how to get to that point."

Before the ideas go on the page, they'll observe a clients' living habits, how they spent their time, if they entertain a lot, and examining the overall function on the space to determine lakeside views or to take advantage of sunlight.

The biggest challenges they face is not permitting applications and zoning approvals, it's the granite rock of the Canadian Shield.

"The biggest thing we warn clients is we never know what we're going to find under the ground,” said Brenda. “There's an element that may shift our thinking and we have to talk about blasting. That aspect is always unknown."

Their firm's coverage area is “anywhere the project takes us,” said Matt. They have worked on projects in southwestern Ontario and as far north as Elk Lake.

These days, clients are wanting more eco-friendly, off-grid cottages or straw bale house with design elements that maximize the southern exposure to the sun.

Brenda, who is the process of obtaining her Leadership in Energy and Environmental Design (LEED) certification expects that will be a requirement if their firm intends to bid on more government and institutional contracts.