More than 70,000 people are expected to pour into the small village of Earlton throughout the 2009 International Plowing Match and Rural Expo (IPM) from Sept. 22-26, the first time the annual event is held in Northern Ontario.
Aug 10, 2009 4:49 PM By: Nick Stewart 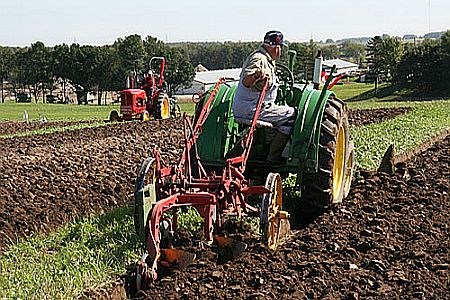 Held in Bruce County last year, the International Plowing Match and Rural Expo is expected to draw 70,000 attendees from throughout Canada.

More than 70,000 people are expected to pour into the small village of Earlton throughout the 2009 International Plowing Match and Rural Expo (IPM) from Sept. 22-26, the first time the annual event is held in Northern Ontario.

While the event's name may lead some to believe it will be little more than a display of plowing prowess, organizers are quick to point out the event's broader appeal.

"That's the first misnomer that we have because it's really much more than that," says Darlene Bowen, the event's co-ordinator.

"It's a huge event aimed for everybody and there's a little something for everyone at this."

Local interest in the event is high and Bowen expects this will translate into considerable economic benefits for the region.

Studies by the Ministry of Tourism indicate every guest will likely spend an average of $350. In combination with the $3 million being spent on staging the event itself, the proceedings will generate $21 million for the area.

The effects have already been felt. The Ministry of Transportation has already spent $1.5 million on infrastructure upgrades to support the event, including improvements to local roads.

Some of these changes have been made to simplify travel to and from the event, which is to be set up in a 1,000-acre farmer's field. It will feature not only the plowing activities, but also a "tented city" spanning 110 acres.

This will include wide-ranging shops and displays, with a central focus on Northern Ontario.

An antique and historical section will house more than 30 museums to display the North's many achievements, while an artisan tent will host up to 60 craftspeople from throughout the region.

Daily entertainment will be provided at the five tents making up the lifestyle section, including a theatre area for demonstrations of cooking, health issues and many others.

A large regional display will also be established to showcase the areas of Nipissing, Temiskaming, Cochrane and northwestern Quebec to "let people see there's more here than rocks and trees," says Bowen.

The emphasis on the northeast is important, she adds, as at least 50 per cent of attendees are expected to be from southern Ontario and northwestern Quebec, with some coming from as far away as Manitoba, Saskatchewan and Alberta. This includes a total of more than 10,000 students, many of whose visits are sponsored by various levels of government.

With those kinds of numbers pouring into the Temiskaming Shores area, the issue of housing visitors is organizers' Achilles heel, says Bowen.

Motel rooms have already run dry in the immediate area as people scramble for accommodations. Some spaces still remain in Temagami and areas in northwestern Quebec, as well as nearby camps, cottages and provincial parks, but many of them are filling up rapidly as the event draws closer.

A homestay program is being developed, where residents can put up event attendees. A recreational RV park is also in the works, with 2,100 sites due to be adjacent to the tented city, which has tripled the population of Earlton, Bowan jokes. More than 1,400 spaces have already been booked, with hundreds of requests pouring in every week.

To further spread the potential areas for accommodations, organizers have secured an Ontario Northland train that will run from North Bay to the match site every day, leaving at 7 a.m. and returning at 4:45 p.m. Altogether, this will provide 4,000 seats to and from the five-day event.

"We've got really high hopes for this event and with a big focus on the North, we think we can really provide a strong boost to the regional economy at a time where it needs it."

Modest rebound for Thunder Bay's economy predicted for 2021
Jul 23, 2020 8:00 AM
Comments
We welcome your feedback and encourage you to share your thoughts. We ask that you be respectful of others and their points of view, refrain from personal attacks and stay on topic. To learn about our commenting policies and how we moderate, please read our Community Guidelines.