If you’ve ever wanted to ride a moose, you’ll soon get your chance — in a manner of speaking — when Cedar Meadows Resort & Spa opens its newest attraction to the public.
0
Aug 8, 2016 3:24 PM By: Lindsay Kelly 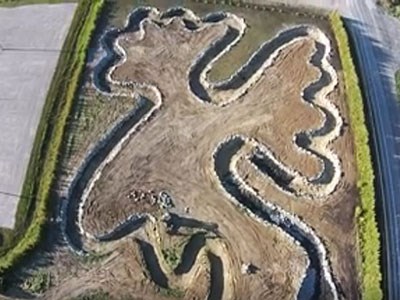 Next up at Cedar Meadows Resort & Spa in Timmins is a lazy river, shaped like a large moose’s head, which will double as a skating path in winter.

If you’ve ever wanted to ride a moose, you’ll soon get your chance — in a manner of speaking — when Cedar Meadows Resort & Spa opens its newest attraction to the public.

Emerging from the landscape of the Timmins resort is a winding lazy river, laid out in the shape of a giant moose’s head, on part of the 175-acre property.

During the winter months, guests will be able to skate along the iced over surface, while in the summer, they’ll be able to float along the gently flowing river.

It’s the newest development from Cedar Meadows’ proprietor, Richard Lafleur, who is constantly integrating new ideas into the resort to freshen its offerings and enhance its appeal.

“The idea behind it is to create an amenity to bring guests to stay here a little longer,” he said.

Open since 2000, Cedar Meadows started out with 29 rooms and has continued to grow. Additions have included a tour that brings visitors around the 100-acre wildlife park, where moose, bison, deer and elk roam; a 24-hour exercise room; a spa, which offers facials, massages, manicures and pedicures; and Nordic baths, which visitors can enjoy year-round.

There are now 49 rooms and and five private chalets. Six conference rooms of varying sizes are available for conferences and business meetings, and unique dishes are prepared on site by the executive chef at Le Voyageur Restaurant.

Today, Cedar Meadows is a popular location for conferences and conventions, and a leading venue for weddings, but business travellers also favour the accommodations to get a restful night’s sleep.

The lazy river idea first came to Lafleur about 15 years ago, in a flash of inspiration at 4 in the morning. He immediately planted 500 trees — spruce and red maple — on a nearby lot, which will be used in the river’s design.

“It’s been a long, long time in the planning,” Lafleur said. “The trees, I planted them 15, 20 years ago. They’re all mature now, and I’m going to bring them in off the property, only one kilometre from here.”

Lafleur had the design laid out via satellite coordinates, and then dug the trench, which has been lined with rocks leftover from a local construction project. Next, he has to install pumps, which will feed water from on-site ponds to the river.

LED lighting installed in the river will light it up, and the transplanted trees will transform the area into a cool, shaded oasis.

Rather than completing the work all at once, which he estimates would cost hundreds of thousands of dollars, Lafleur is doing all the work in phases, on his own, which is why he hesitates to give an estimated completion date.

The project’s piece de la resistance will be the moose’s eye, which will be dotted with a glass igloo where visitors can sleep under the stars.

“I got the idea from a place in Finland; that’s what they do,” Lafleur said of Kakslauttanen Arctic Resort in Lapland, the country’s northernmost region. “They’ve got 20 of them, and you go see the aurora borealis.”

Although Timmins does get a glimpse of the northern lights occasionally, Lafleur will market his igloo as a year-round place to sleep under the stars.

“People go for experience, and that’s what this place is going to be all about: come here for the experience,” Lafleur said.

Kirkland Lake's Heritage North up for sale
May 7, 2020 11:54 AM
Comments
We welcome your feedback and encourage you to share your thoughts. We ask that you be respectful of others and their points of view, refrain from personal attacks and stay on topic. To learn about our commenting policies and how we moderate, please read our Community Guidelines.