Hampton Inn by Hilton in Timmins has introduced Digital Key, which allows guests to use their smartphones to open their rooms.
0
Jul 14, 2017 9:00 AM By: Lindsay Kelly 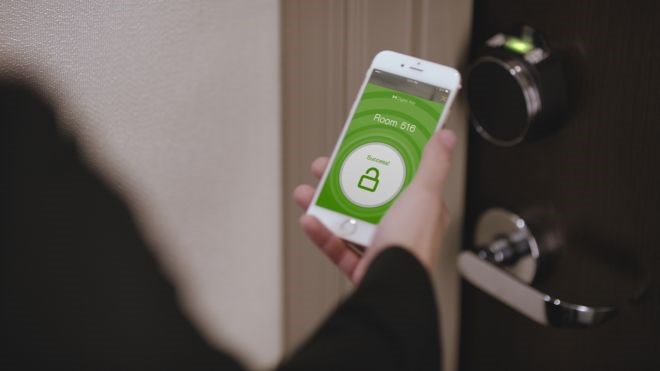 Hampton Inn by Hilton in Timmins has introduced Digital Key, an app-enabled option that allows guests to use their smartphones to open their rooms. (Hilton Worldwide photo)

Guests staying at the Hampton Inn by Hilton in Timmins can now use their smartphone to unlock the door to their room.

On May 18, the hotel launched Digital Key, a new option on the Hampton-developed phone app that allows guests to securely access their rooms without needing the plastic key that’s typically issued to guests after checking in.

The Timmins hotel is the fourth Hampton Inn in Ontario, and the seventh in Canada, to get the technology, which parent company Hilton is rolling out in properties across Canada over the next year and a half.

“We’re excited, because it’s technology that our guests are definitely talking about,” said John Crescenzi, the hotel’s general manager.

Digital Key is an option in the smartphone app connected to Hampton Honors, the hotel chain’s in-house rewards program, in which any guest can enroll.

The app allows guests to book their room, select which room they want to stay in, and check in to the hotel, all on their phone and without ever visiting the front desk. The app additionally provides access to other secure areas, like the hotel’s side entrances and pool room. All guests need is a Bluetooth connection.

“They can book their room, select their room, open their room with their key, and they can also get their receipt right through the app,” said Crescenzi, who said front desk staff now spend less time behind the desk and more time greeting and welcoming guests in the lobby.

Guests appreciate the convenience of not having to wait in line at the front desk, and they can go right to their rooms to relax after a long day of travel or business meetings, Crescenzi said. Because they don’t have to pass through the lobby, it also offers a measure of privacy for guests concerned about maintaining their anonymity.

Of course, guests who don't have a smartphone, or don't want to use the app, can still use a traditional key.

Multiple layers of security are built into the app, and Crescenzi said any early security concerns were hammered out in the app’s beta phase.

“Actually, people are much, much more protective of their cell phones than they are of hotel room keys,” he said. “We’ll find some guests will leave their key on the breakfast table, even with the folder that shows the room number, and to me, that’s the height of insecurity.”

When guests first open the app, they’re given the option to “mask” their room number, so nobody else using their phone will see it. So, even if a guest’s phone isn’t password protected, someone picking up their phone won’t know which room they’re staying in.

One disadvantage to the technology is that any other guests using the same room and trying to access the room separate from the app user will need their own key to get in.

Crescenzi was first introduced to Digital Key last October during a company conference in Orlando, when it was revealed that all Hampton Inns would eventually have the technology installed. Because the Timmins location is a newer hotel — it was constructed in 2015 — the retrofit for the system was easy and cost-effective, he noted.

Crescenzi notes that the Timmins hotel was named the second highest scoring Hampton Inn in Canada and the first in Ontario for guest satisfaction in 2016 — achievements that haven’t gone unnoticed by the parent company — another reason why the Timmins property was among the first in Canada to get the technology.

Hilton is not the only hotel company introducing smartphone-enabled technology. Starwood properties (Sheraton, Westin, Four Points) offers smartphone access through its SPG app, while OpenKey is an independent app that offers similar services.

But Hilton was among the first to introduce smartphone room access when they announced Digital Key in 2015, first rolling it out in the U.S. in 2016, and now across Canada. There are now 1,400 Hilton-brand hotels worldwide using the technology, and there are more to come.

“The hope is that guests are going to see more and more options for Digital Key, not so much in a market like Timmins, where there’s only us, but if you’re in Toronto and you love the technology, you may choose to stay in one hotel over another simply because it’s there,” Crescenzi said.

In Northern Ontario, at least two more Hampton Inns will get the technology in the coming months. Crescenzi said the Sudbury and North Bay properties are scheduled to incorporate the technology by the end of 2017 — one in August and the other in October.