It’s a plan-ahead year for management at the Thunder Bay International Airports Authority with design work in the queue on a little-used runway and the terminal building.
Feb 19, 2015 8:07 PM By: Ian Ross 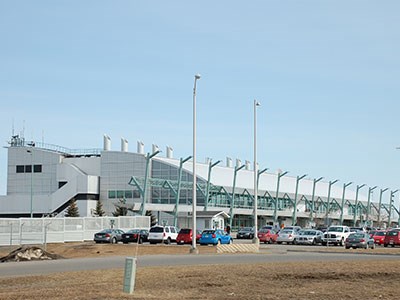 As one of the Ontario’s busiest airports, the Thunder Bay International Airports Authority is looking to make terminal and runway improvements in 2016.

It’s a plan-ahead year for management at the Thunder Bay International Airports Authority with design work in the queue on a little-used runway and the terminal building.

Ed Schmidtke, manager of business development, said architectural and engineering work will start this year to assess the condition and remaining lifespan of the airport’s 5,300-foot crosswind runway.

Aircraft only use this runway when there are strong winds out of the northwest.

“By far, it’s secondary to our primary runway by a long shot,” said Schmidtke.

Depending on the findings of the study, the runway could be resurfaced or it may involve more significant substructure work in 2016. That work is not yet underway. A request for proposals is being prepared.

“We know it’s time to have a serious look at that pavement,” he said.

Inside the terminal building, Schmidtke said a design firm will be hired to evaluate the interior aesthetics and find “creative ways” to expand the second floor departure lounge to alleviate crowding issues during key departure times.

“The building is very efficient and it’s served us very well,” said Schmidtke. “We’re starting to feel some pressure on the second floor and we have to expand that.

Since opening in July 1994, Schmidtke said the terminal hasn’t seen any extensive improvements aside from introducing post- 9/11 security measures.

“It’s served us very well and continues to do so but we need to stay ahead of the curve.”

The airport handles between 700,000 and 800,000 passengers through the terminal on an annual basis. Outside of the Greater Toronto Area and Ottawa, Thunder Bay ranks third in the province on passenger volume.

The airport is served by Air Canada, Porter and WestJet, plus a number of regional carriers and charter service companies.

Thunder Bay lost Delta service to Minneapolis-St. Paul in 2010 and early last year United Airlines discontinued flights between the northwestern city and Chicago O’Hare after less than a year.

Schmidtke said they would like to re-establish connections with those two hubs, but significant contraction in the aviation business south of the border makes it increasingly difficult for any small Canadian market to attract that kind of service.

“We continue to track the data, watch and talk to all the providers in the hopes that someday we can bring that back.”

A reduction in business travel played a significant role, particularly with the downturn in the global mineral sector and the closure of Cliffs Natural Resources’ local office.

On the business park side, Schmidtke said the authority expects to see a new hangar constructed this year for an undisclosed commercial client.

Local freight carrier Cargo North, with its new Basler BT-67 turboprop aircraft, continues to make inroads and expand its partnerships with remote First Nation communities in northwestern Ontario, and the Pilatus Centre, which performs heavy maintenance on aircraft, continues to rake in customers from both sides of the border.

The airport authority is still searching for a new CEO following the departure of Scott McFadden last September. There’s no timeline on when a decision will be made on naming a successor.

Modest rebound for Thunder Bay's economy predicted for 2021
Jul 23, 2020 8:00 AM
Comments
We welcome your feedback and encourage you to share your thoughts. We ask that you be respectful of others and their points of view, refrain from personal attacks and stay on topic. To learn about our commenting policies and how we moderate, please read our Community Guidelines.