Shipping up to Sioux Lookout

Behind the exterior vinyl cladding covering the Days Inn in Sioux Lookout is a unique substructure, which, if you didn’t know it was there you’d never suspect it.
0
Feb 9, 2015 3:07 PM By: Lindsay Kelly 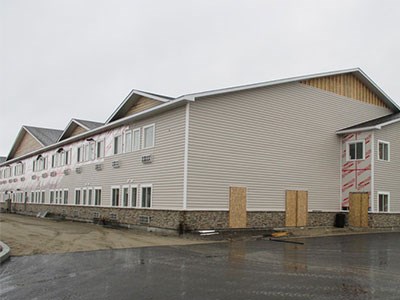 The 60-room Days inn hotel in Sioux Lookout has been constructed using a base of 120 shipping containers by Calgary-based company Ladacor. It's the largest hotel of its kind in North America.

Behind the exterior vinyl cladding covering the Days Inn in Sioux Lookout is a unique substructure, which, if you didn’t know it was there you’d never suspect it.

The 60-room hotel, which opened to the public in early December, is constructed of 120 steel shipping containers, making it the largest such hotel in North America.

Owned by Don Klisowsky, the hotel was constructed by Ladacor, an Alberta-based construction company whose focus is on using the shipping containers as the modular core, which combines durability with environmental sustainability.

“You have a really strong building block, and when we take that and incorporate it into a building, you get all those benefits of strength, durability, and you really get a steel building core for the cost of a conventional constructed building,” explained Joseph Kiss, Ladacor’s president.

With a background in prefabricated steel buildings, particularly in industrial and commercial applications, steel shipping containers was a logical next step for construction for the company.

“As a result of a trade imbalance between overseas and North America, shipping containers are fabricated overseas in China and Asia, they’re filled with goods, they’re shipped over to Canada and they’re only used once,” Kiss explained.

“Once they come to North America, there aren’t really any more uses for them, so it was really this growing issue that the founders became aware of and was really the impetus for starting Ladacor.”

Ladacor spent its first three years focused on research and development until it came up with a suitable prototype. The Days Inn is the company’s first commercial building.

Shipping containers are constrained by eight-foot widths, but their lengths vary anywhere from 20 feet to 50 feet. Eight-foot widths wouldn’t be suitable for any room, Kiss explained, so Ladacor cuts the containers and fits them together to make larger rooms.

The modules are manufactured in Ladacor’s Calgary facility and then shipped to the construction site where Kiss said they are basically “plug and play.” Ninety per cent of the utilities are completed in house, so when they arrive on site, they just need a quick connection. All modules must meet current building code requirements.

Kiss estimates this approach saves anywhere between 30 and 50 per cent of the time required to construction a similar building using traditional methods. The Sioux project, for example, would have taken about two and a half years to complete using traditional construction, whereas the use of shipping containers cut down building time to 13 months.

Other partners on the project included Steenhof Building Services Group of Toronto and Orillia’s Bradanick Construction Services, in addition to a large number from the local workforce and contractors to do the site erection.

“The goal is and continues to be to reduce the amount of time and effort that are spent in the field, and by doing so, you reduce the cost of the project,” Kiss said.

Shipping containers can be used for field offices, wash carts, workforce camps (oil patch, mining), student residences, senior residences, and affordable housing, he added. Ladacor is already in discussions with a number of First Nations looking at the possibilities for housing.

“We’re seeing a lot of interest in the multi-family, in the hotels, in the student residences, in the senior families, in the affordable housing, so we’re seeing it really in both (residential and commercial),” Kiss said.

Ladacor will continue to develop its technology and fine-tune its process, he said. Building from shipping containers remains on the fringe of construction methods, but as people recognize the benefits of its use, Kiss believes there will be a growing market for Ladacor’s services.

“It’s definitely in the minority of what’s being done out there in terms of construction, but based on the interest we’re seeing and based on the success of this project and how well it went, we’re very optimistic about that growing and about different applications being used,” he said. “We think it’s a very strong technology to use in a lot of applications.”

Rideshare service expanding to Timmins
Dec 3, 2019 4:00 PM
Comments
We welcome your feedback and encourage you to share your thoughts on this story. We ask that you be respectful of others and their points of view, refrain from personal attacks and stay on topic. To learn about our commenting policies and how we moderate, please read our Community Guidelines.