Salzburger Hof specializes in time away from city life

At 82, Ann Elsigan keeps up a breakneck pace that would challenge a resort operator half her age. As the host at Salzburger Hof, a lakeside resort on the shores of Lake Superior, she’s up at 8 a.m.
Nov 6, 2014 7:00 PM By: Northern Ontario Business Staff 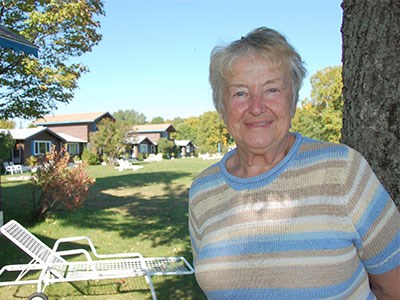 At 82, Ann Elsigan keeps up a breakneck pace that would challenge a resort operator half her age.

As the host at Salzburger Hof, a lakeside resort on the shores of Lake Superior, she’s up at 8 a.m., greeting guests, making preparations and ensuring the resort’s smooth operation. Only at 9 p.m., when the last guest has been welcomed, registered and settled for the night, does she hang up her apron.

Attention to detail, care and sincerity aren’t just part of a job, but are ingrained in her approach to hospitality, which puts her guests’ needs first. She recognizes she’s providing a service, one that patrons could seek elsewhere.

Tucked into the shores of Batchawana Bay, about a 40-minute drive north of Sault Ste. Marie, Salzburger Hof is a unique, 80-acre piece of paradise that fronts onto 1,200 feet of waterfront.

Business meetings and conferences have slowed down in recent years; budgetary and time restraints prevent most businesses from leaving the city, Elsigan said.

But the client who chooses Salzburger Hof over a mainstream hotel chain is looking for something different. The calming atmosphere, open space and time away from technology encourage people to put away their smartphones, tablets and laptops, and talk to each other.

“Meetings out here, they like it because if it’s a nice day, they can move out and do some of it outside,” she said, noting the only Wi-Fi access is available at the lower dining lounge and the three-bedroom cottage.

Salzburger Hof has always been a family endeavour, starting when Ann and her husband, Ralph, bought the property as a collection of buildings in 1972.

Two of her four daughters help run the resort — Karen whips up the delicious authentic Austrian fare in the kitchen, while Sylvia oversees housekeeping — and her sons-in-law, Armando and Ben, act as host and handyman, respectively.

The menu is a big part of the appeal for visitors. Salzburger’s Hungarian goulash, schnitzel, and apple strudel get rave reviews from diners, and its Bavarian Nights — a three-day buffet event featured every fall — always draws a packed house.

The resort has been acknowledged repeatedly by Lake Superior Magazine, TripAdvisor, and Where to Eat in Canada, although Elsigan often doesn’t even know a reviewer has been in her dining room until she gets notice of her recognition.

“I’m very proud of my family,” she said. “I lost my husband 20 years ago and if it wouldn’t be for my family, I wouldn’t be here.”

Immigrants from Austria in 1952, the Elsigans came to Canada so Ralph, who trained as a pilot, could find work. He bought three Beaver bush planes and operated Batchawana Bay Air Service for eight years, ferrying passengers to a series of outposts for fishing expeditions.

The couple’s planes were called into service in November 1975 to assist with the search for the Edmund Fitzgerald, which sunk during a fierce storm, killing the entire crew of 29. “The debris was eight feet high,” recalled Elsigan.

After selling their stake in the business, the Elsigans focused their efforts on Salzburger Hof. A family cottage, a few wooden structures and the round building that currently operates as the lower dining lounge were all that was on the property. Work done by the Elsigans over the years has given it its present identity.

Today, 42 years into operating the business, the resort trades in peace, tranquility and the sweeping vistas of Lake Superior. It’s ideally situated for visitors touring the nearby provincial parks, Lake Superior and Pancake.

Elsigan doesn’t stay on the property year-round these days, but makes her home in Barrie when the final guests have left after Thanksgiving.

“If it would have been up to me, I would have lived right in the middle of Toronto,” she chuckled. “My kids think it’s crazy.”

But each spring the gregarious innkeeper returns to open up the resort, greeting new visitors and longtime friends returning for their weekend getaways. The secret to succeeding in the hospitality sector is simple, she said: treat people well. And be persistent.

“You just have to stick it out in many ways,” she said. “People think, ‘Oh, I’m going to buy something and in a few years I’m going to have it made.’ No, you’re going to get some good years, some bad years, and some changes.”