Ray Rivard calls the North Shore of Lake Superior one of the least exposed and underappreciated areas of Ontario.
Feb 19, 2015 8:00 PM By: Ian Ross 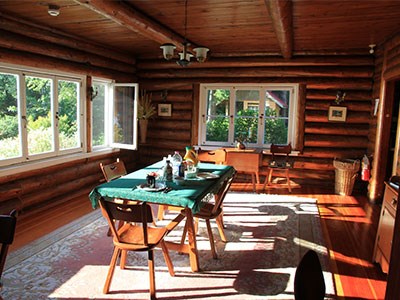 Nipigon River Adventures and Lodge in Red Rock is a favourite social and corporate gathering spot on the North Shore of Lake Superior for guided fly-fishing excursions and wildlife viewing.

Ray Rivard calls the North Shore of Lake Superior one of the least exposed and underappreciated areas of Ontario.

The owner-operator of Nipigon River Adventures and Lodge in Red Rock wants to change the perception of this rugged stretch of coastline stretching from Grand Marais, Minn. to Sault Ste. Marie as more than just “pass-through” country for travellers, but give them a reason to stop and stay.

Located an hour’s drive east of Thunder Bay, just off the Trans-Canada Highway, Rivard’s lodge sits in the midst of a national marine conservation area, home to an abundance of wildlife, bays and islands, and more than 50 shipwrecks.

The cornerstone of Nipigon River Adventures is the lodge, famously known on the North Shore as the landmark Quebec Lodge. But Rivard downplays the historic name when marketing it to an American clientele.

“The answer I always get is: ‘Do you have to speak French and what part of Quebec are you in?’’

The 4,000-square-foot Quebec Lodge was built in 1937, the same year the town of Red Rock was established with its paper mill. The chateau-like structure was the home-away-home for the Quebec-headquartered company executives and their customers.

Rivard, a former provincial tourism manager, acquired the lodge and its secluded 25-acre property from Norampac, which overlooks Lake Superior, about seven years ago.

He estimates the lodge hosts about 12 to 15 special events a year ranging from weddings to dinner concerts to murder mysteries to corporate outings.
Rivard works with local guides to offer hiking and fly-fishing packages. During the fall salmon run, which attracts a large number of bald eagles to the Nipigon River, Rivard teams up with Toronto wildlife photographer Gary Blake to host a six-day wildlife photo safari.

“If you think of the various activities that people are willing to travel a long way for, they need a unique and good quality experience. That can be birding, sailing, fly-fishing; those are specific things that we promote.”

But primarily, Rivard said, they promote the area’s brook or speckled trout. Next year is the 100th anniversary of the world-record brookie caught on the river.
“Fly fisherman have deep pockets. They’re interested in the experience and we’ve got world-class brook trout fishery here on the Nipigon River.”

Rivard said one client, Atlantic Power from Boston, operators of a generating station near Beardmore, annually books a week-long company retreat which combines field work with a relaxing fly-fishing outing.

For corporate retreats, the lodge is a favourite gathering spot for government ministries and the Ontario Provincial Police’s tactical teams which stays and practices on the extensive acreage east of town.

“That is real plus for any of the retreats we have here because it becomes a social event.”

The lodge also provides accommodations for those attending the Live from the Rock Music Festival in August.

The largest meeting space in the lodge is the 1,600-square-foot Great Room which has hosted weddings for 60 people but can more easily seat smaller groups of 20 to 25.

“People seem to be getting more casual with their meetings,” said Rivard. “Rather than set up tables, they seem to be comfortable with a presenter and a screen sitting down in a living room setting.”

The lodge provides flexible accommodations for 15 with plenty of space outside for tents and recreational vehicles.

The lodge operates as a bed-and-breakfast, but full meal packages can be arranged and guests can have access to kitchen facilities and the outdoor barbeque.

With recent refurbishments to the town’s marina, Rivard has leased restaurant space at the waterfront.

“For larger groups that may not want all their meals at the lodge, we can take them down to the restaurant and do a special meal at the marina. The specials can be anything from walleye to prime rib to a pasta night.”