The Manitoulin Hotel and Conference Centre has had some growing pains, but with new management on board, it’s settling into a solid routine for its fourth season.
0
Aug 8, 2016 2:42 PM By: Ella Myers 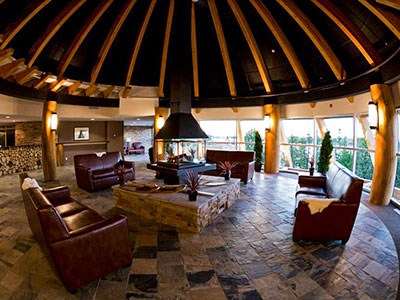 A teepee-shaped lobby greets guests at the Manitoulin Island hotel.

The Manitoulin Hotel and Conference Centre has had some growing pains, but with new management on board, it’s settling into a solid routine for its fourth season.

The hotel brought on Barrie-based Liberty Hospitality to manage the property in the summer of 2015, and in the past year, they said business has improved and there are plans for growth ahead.

“They wanted someone with more expertise, and now we have a lot more structure,” said Stella Gan, the director of sales and marketing at Liberty. “The booking has increased, we’re able to increase the conference and meeting booking, but this coming season is the true test.”

The hotel is located on the waterfront in Little Current on Manitoulin Island.

Six nearby First Nations opened the hotel in 2013 — Aundeck Omni Kaning, M’Chigeeng, Sagamok, Sheshegwaning, Whitefish River First Nation and Wikwemikong. For the first two years, they managed the hotel themselves, but decided to bring in professional management to help things run more smoothly. They are still the owners and Gan said that the hotel and its amenities continue to reflect that.

“The structure and the theme really reflects the Aboriginal ownership,” said Gan, referencing the teepee-shaped lobby and waterfront location on the North Channel of Lake Huron. Corporate clients can access canoeing routes, hiking trails, and cultural activities and organizations in their off time, and incorporate them into teambuilding exercises.

Along with their recreational offerings, the 59-room hotel has the typical conference and convention offerings as well.

High-speed internet is available throughout, and there is access to audiovisual equipment. They can make use of it all in the 5,600-square-foot Conference Centre.

“We get a lot of Aboriginal business. That is our first and foremost client, though we also host government-related business, weddings and other events,” said Gan.

While this season is looking up, last summer had some rougher points. Their North46 restaurant shut down for nearly nine months, only reopening in the fall of 2015 after the new management came on and hired a new chef from the Toronto region. Now, the restaurant is expanding to offer catering to other events in the area.

“We wanted to offer food with some Aboriginal flare to it to go with the theme of the hotel, as well as offer food that is palatable to the general public,” said Jennifer Sansford, the hotel’s general manager. “Now we have a chef who can really create something, a menu, not just preparation.”

Most of the hotel’s business is during the summer; however, Gan and Sansford said they are focusing heavily on the off-season use of the hotel for conferences and conventions.

“Right now we’re really trying to grow the corporate side of things and it’s really working well because there’s a lot of business in the area,” said Sansford.

The management team was as new to the hotel as the hotel was to them. Liberty now operates eight event venues across Ontario, from Sioux Lookout to Kingston, but the Manitoulin hotel is unique in its independent ownership.

“It’s our first non-branded hotel, so there are complications, but through driving different sales and working on different areas of the market, occupancy-wise it has increased quite a bit,” said Sansford.

Before taking on the role, Sansford was managing a different hotel in the London area. Moving to Manitoulin has been a shift in her life, and one she said she enjoys.

“Mostly in how beautiful it is to come to work every day — you can’t really beat that,” said Sansford.