When the Killarney Mountain Lodge opened its doors in the early 1950s, it was an escape from the big city for the employees and customers of the Fruehauf Trailer Company.
0
Aug 8, 2016 3:28 PM By: Ella Myers 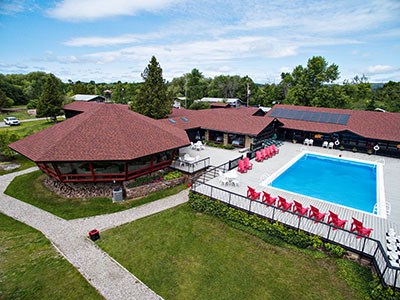 When the Killarney Mountain Lodge opened its doors in the early 1950s, it was an escape from the big city for the employees and customers of the Fruehauf Trailer Company.

The revellers would fly to the Georgian Bay lodge — the only way it could be accessed — from Detroit. There, they found a heavily forested, pristine haven where costume parties and fancy hats were encouraged, and talk of politics and religion was banned. The punishment for breaking the rules was a flight straight back home.

“All the pictures we have from that time, there’s lots of costume party pictures, one all wearing hats with hot dogs on them. I’d love to know what that story is,” laughed current general manager Kelly McAree.

The lodge, located an hour south of Sudbury, changed hands from the Fruehaufs to the East family in 1962, after a road into Killarney was built, and it quickly opened up to a broader customer base and now attracts tourists and visitors from all over.

The rules aren’t as strict anymore, but the lodge still acts as a refuge for corporate customers who gather there year-round for conferences and business meetings and want a good balance of work and play.

“We’re an escape from the hectic pace of the big city; it’s really quiet, people can focus on the task at hand and have a good time for relaxation,” said McAree. “We have excellent facilities for both meetings and those types of things people might incorporate into a corporate retreat.”

The lodge has modern facilities including a swimming pool, sauna and tennis court, but some of the most popular features are more naturally occurring, like the guided tours of Killarney Provincial Park, and access to swimming, fishing and boating.

These recreational activities are accompanied by amenities expected of a conference venue — presentation materials, audiovisual equipment and appropriate rooms and meeting spaces. Their Long House has room for 100 guests for presentations.

McAree has been with the lodge since 2015, when Holden Rhodes bought the property from the East family. Before this, McAree was working at luxury resorts in B.C.

“I was looking for an opportunity to work at a resort that was growing,” said McAree. With a $18-million expansion in the works, he found the right place.

The expansion includes the addition of 60-some rooms to the lodge to accomodate more guests. The existing pine-panelled rooms have been repainted, have newer beds, and updated air conditioning for the hotter summer months. A new kitchen will improve on the existing Canadian comfort food offerings, which include the famous pickerel from the region.

The modernizations to the space will mean that their capacity for conferences will go from around 100 to the 300 to 400 attendee range.

The lodge faced a major setback in May, when a fire destroyed a building containing some of the new guest rooms. However, McAree said this will not impact business offerings for the season, and he anticipates construction will continue in a reasonable timeframe.

The renovations and expansions will be done over the next few months, and McAree said there should be a full opening of the facilities in June 2017.

However, McAree said the lodge won’t be done growing after that phase.

“The owners asked me to come up with the perfect convention centre — flexible space to host big and small groups with a satellite kitchen,” said McAree. The seasoned hotel manager said this is a challenge he is looking forward to.

McAree said many of their customers have been coming for generations. In fact, some of the Freuhauf descendants still frequent the lodge. When they did a survey about the expansions, they realized their regulars didn’t want much to change. They were happy. This is something they took into consideration for the changes.

“The biggest thing that people can count on is that we’ll have all the modern capabilities to host modern meetings, but also still provide a quiet unplugged experience when it comes to rooms,” said McAree. “The overall result was really careful attention to maintain the character of the property but a vastly improved comfort level.”