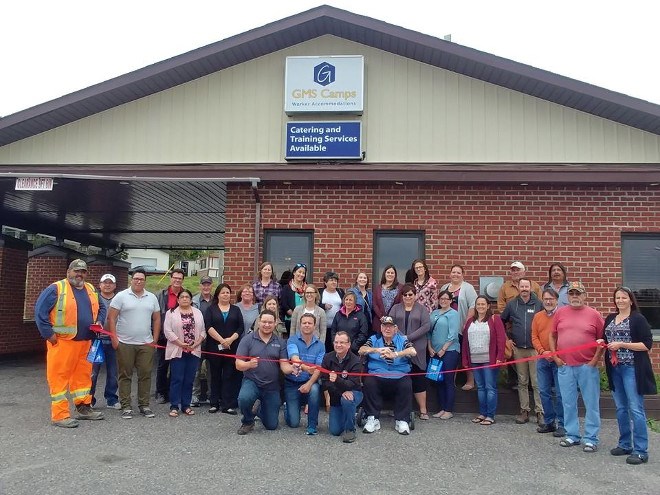 GMS Camps and Catering L.P. cut the ribbon on the second of its two properties near Marathon on Sept.13. (Supplied photo)

Two enterprising First Nations have teamed up to address a shortage of transient worker accommodations along the north shore of Lake Superior.

With hotel parking lots in the area full due to the bustling mining and forestry activity, GMS acquired two former roadside motel properties on the Trans-Canada Highway, roughly a four-hour drive each way between Thunder Bay and Sault Ste. Marie.

“We’re in the thick of everything that’s going on in the area,” said Steven McCoy, a business development officer with White Lake Limited Partnership, the economic development arm of Pic Mobert.

“There’s a lot of development going on with mining, forestry, construction and we believe there’s a lot more coming, so that’s why we’ve positioned ourselves by these accommodations.”

With Harte Gold bringing its Sugar Zone deposit into commercial production north of White River and the rebound in the area’s forestry industry, including Pic Mobert’s own business interests at sawmills in White River and Hornepayne, McCoy said there are plenty of business opportunities out there to tap into.

But the mega-project everyone is waiting on is construction of the East-West Tie transmission line, the 400-kilometre-long power line upgrading project between Wawa and Thunder Bay.

The construction start is on hold pending the outcome of Ontario Energy Board hearings this fall on two competing bids from NextBridge and Hydro One.

“We’re anticipating more of a boom in the area and we identified there was a gap in the accommodation coverage, and that’s where GMS Camps and Catering came about,” said McCoy.

The previous owner of the Peninsula Inn and Wayfare Inn had no use for the two properties, located on opposite sides of Highway 17 near the Marathon Airport, and McCoy said they were able to secure a good deal for both sites.

The refurbished properties offer a combined 50 single and double units with accommodations for 75.

An upstairs three-bedroom apartment over the office at the former Peninsula Inn has been renovated into an executive suite, complete with updated kitchen, dining, work and living space for long-term rentals.

The onsite banquet hall at the former Wayfare site can host 75 to 100 for meals or be converted into a training facility. Supercom Industries L.P., a First Nation-owned contracting and training entity, held sessions there last summer for new employees who will be working on the East-West Tie.

Employment-wise, McCoy said the two sites are creating a handful of First Nation jobs in housekeeping and maintenance positions.

The Morris Group entered the picture, McCoy said, because of White Lake’s familiarity with them through their involvement in the Harte Gold worker camp in White River. The Sudbury company specializes in industrial pre-fabricated buildings and workforce housing.

Outland Camps is also available to GMS to provide catering services for clients, if requested.

GMS secured its first corporate client late last spring. Pioneer Construction, which has a contract at the Barrick Gold Complex at Hemlo, booked the Wayfare site.

The Peninsula property, which was renovated and opened just before a Sept. 13 ribbon-cutting, is now available for bookings.

McCoy, who has a background in the hospitality industry, said he has a couple more corporate clients in the pipeline and he’s getting inquiries from other firms as well.

With more development projects expected to roll out, McCoy said acquiring more accommodations is something they’ll consider, whether it’s upgrading an older motel site or doing modular and trailer setups.

“If there’s a high demand for accommodation, it’s something we’ll definitely look at.”

Lights out on Thunder Bay’s conference and convention scene
Apr 3, 2020 8:00 AM
Comments
We welcome your feedback and encourage you to share your thoughts. We ask that you be respectful of others and their points of view, refrain from personal attacks and stay on topic. To learn about our commenting policies and how we moderate, please read our Community Guidelines.