A group of Sudbury restaurateurs are working past their natural culinary competitiveness and working together to protect their interests, and give back to the community.
0
Aug 8, 2016 3:40 PM By: Northern Ontario Business Staff 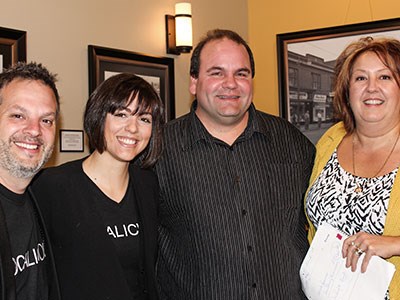 A group of Sudbury restaurateurs are working past their natural culinary competitiveness and working together to protect their interests, and give back to the community.

In September 2014, P&M Kouzzina’s owner, George Moutsatsos, was visiting a fellow restaurateur when they decided to do something about a common problem they’d been facing: “getting lost in the limelight of the big places.”

“We wanted to create an association of independent, local restaurants, to shine our light about,” said Leslie Moutsatsos, P&M’s co-owner.

“We have a lot of talent in this city, especially in the independent restaurant scene. Unfortunately, we seem to get overshadowed by big box businesses, so this is a way to show our community that we have much more. SHARE (Sudbury Hospitality Association of Restaurant Entrepreneurs) is also about building relationships with organizations and foundations by giving back to the community through fundraising events,” said Mark Gregorini, member and owner of Ristorante Verdicchio.

SHARE was officially launched in 2014 and has 11 members, from a whiskey bar to pizza joints.

Part of the not-for-profit association’s mandate is to give back to the community. They launched Localicious to accomplish this. The biannual event has each restaurant feature a set price menu, with a portion of the proceeds going to the NEO Kids Foundation. Since they started, they’ve raised over $28,000 for the organization.

But Localicious has other goals as well.

“It’s two or threefold,” said Moutsatsos. “It brings awareness to us, it offers value to guests, and it gives back to the community.”

Importantly, the event brings awareness to the restaurants during their down seasons, mid-fall, and in the weeks after Christmas. Moutsatsos said that people in Northern Ontario are especially unwilling to leave their houses and get out to restaurants in the colder seasons, but that the novelty of the event has kept the restaurants busier, helping boost the local industry in quieter times.

Moutsatsos said that the association has also allowed for conversations between restaurateurs on common issues like staffing, hiring, supplier issues and maintenance.

There is talk that the members could use their numbers to share the cost of services like advertising and bulk purchasing.

“We could access good deals, and buy in bulk together over the next few years,” said Moutsatsos. “The costs are astronomical in our business.”

However, these ideas are just ideas for now, until they gain more members and more experience.

“We’re still in our infancy; we’re all kind of figuring this out on our own,” said Moutsatsos.

SHARE is actively looking to expand and is accepting applications and interest from other local restaurateurs.

“There are only so many ways you can cut the pie, so you might as well stand together,” said Moutsatsos.