A friendly face for weary travellers 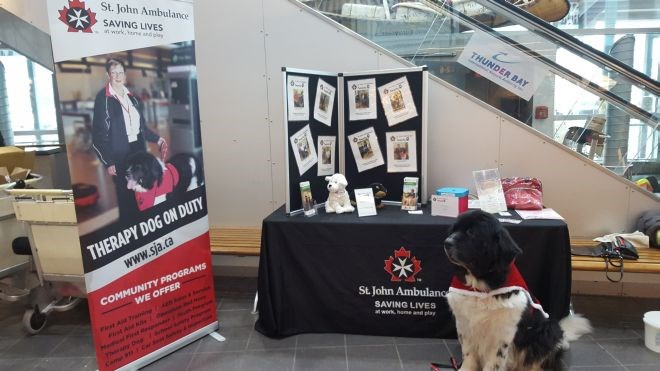 Murphy, an eight-year-old Newfoundland, sits beside the St. John Ambulance display in the baggage area of Thunder Bay International Airport. The kiosk is a popular spot for travellers when handler Gail Bailey and Murphy are there, with travellers stopping to pet the gentle giant of a dog, purchase toys and learn more about the therapy dog program.

Travelling can be stressful, even more so if someone has fears of flying, losing luggage or stress due to business commitments.

So it’s always a welcome sight when there is a friendly face to welcome them to their destination, especially if it has four paws, thick fur and a wet nose.

At the Thunder Bay International Airport there is such a greeter waiting to calm the fears and stresses of travellers. Murphy, an eight-year-old Newfoundland, is part of St. John Ambulance’s therapy dog program, helping to be a calming influence for those in need.

While the term ‘therapy dog’ conjures up images of people with disabilities, Gail Bailey, Murphy’s owner and the coordinator for St. John Ambulance volunteer therapy dogs for northwestern Ontario, says everyone can use a little comforting.

“We get everyone from pilots, crew, passengers; whenever they see Murphy they gravitate toward him and he loves attention,” she said.

“People can be nervous about flying, and having a big, friendly dog with an adorable face does put them at ease.”

The duo have surpassed more than 400 visits to the airport, where the first aid and safety training organization has a kiosk set up next to the down escalator to baggage.

While he is a big dog and many have commented on his seemingly intimidating size, Bailey said Murphy’s gentle nature and sweet face puts everyone at ease.

Therapy dogs have been part of the airport’s atmosphere for a while, thanks to president Ed Schmidtke, who said he saw a few in a west coast hotel greeting guests and thought it would be perfect for the airport.

“The therapy dogs have been a great addition; they change the atmosphere of the place whenever they are here,” he said.

“They really bring a happy and relaxed vibe to the place.”

It helps with business as they are a great way to relieve stress, he said, putting people at ease when they arrive and leave the airport.

There have been countless stories of the interesting people that Bailey says she has met. One man in particular on a business trip confided in the dog, not her, that he was scared to fly.

“He laid down on the floor, petted him and talked to Murphy,” she said.

“He even asked if he could come on the plane with him while he got into his seat. We can’t go through security, but it shows how much they can calm people.”

Another that stood out for Bailey was a distraught woman who had lost her luggage. She came over to Murphy and talked directly to the dog.

“She didn’t address me, but she talked to Murphy, letting her feelings out, and Murphy sat there, listening,” Bailey said.

“When she was done she thanked Murphy for being a good listener and she felt better.”

The kiosk is often a hive of activity, where people can not only greet the dog, but pick up information on the therapy dog program, a few giveaways like pens, or purchase small plush toys to take with them.

“Those are always popular with departing passengers; children especially love the toys as it helps calm them,” she said.

The first therapy dog at the airport, according to Bailey, was a Labrador retriever. Since then, volunteer dog and human teams pick shifts of an hour or two to be at the airport at any given time of the day.

There are many breeds that are used as therapy dogs, but Bailey said Murphy has become the ambassador and the most recognized at the airport.

The northwestern Ontario volunteer therapy dog program is run in Thunder Bay, Nipigon, Kenora, Dryden and Red Lake. Bailey said anyone with a dog can apply, but they have to go through training sessions to determine if they are a good fit. Dogs have to be at least one year old and the person/handler 18 years old.

“We look for well-mannered, groomed calm dogs that like attention, but are not too shy or jump,” she said.

“They can’t be shy because, especially for seniors, they may think they did something wrong. They can’t jump either, and they need to have their vaccines up to date.”

Handlers start with a pre-evaluation seminar to show what is expected of the handler and dog. They go through simulations in hospital settings to see how they react to distractions. If they pass, the dog-and-handler team do 10 accompanied visits accompanied by an experienced team.

The handler has to pass a police background check next, and then do tutorials. Once successful, the dog/handler team receives a uniform — and collar and tag — for identification and insurance purposes.