Fifteen years ago, if Ron Sarazin had suggested Aboriginal communities work closely with the province’s trade unions to ready Aboriginal workers for the skilled trades, he’d be lucky to get a phone call back.
Mar 3, 2015 4:23 PM By: Lindsay Kelly 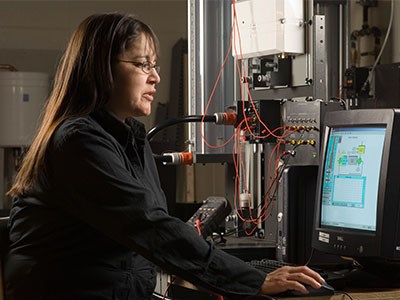 The Aboriginal Apprenticeship Board of Ontario has teamed up with local trade unions and Aboriginal employment agencies to encourage more Aboriginal workers to go into the trades.

Fifteen years ago, if Ron Sarazin had suggested Aboriginal communities work closely with the province’s trade unions to ready Aboriginal workers for the skilled trades, he’d be lucky to get a phone call back.

But as industry starts to realize the skills Aboriginal workers can bring to the trades, the connection between First Nations communities and unions is growing stronger.

As a special projects coordinator for Gehztoojig Employment & Training, Sarazin sits on the Link Committee, an initiative designed by the Aboriginal Apprenticeship Board of Ontario (AABO) to get Aboriginal employment groups and trade unions working together.

“We’re evolving to the point where industry is interested and wants to talk,” Sarazin said. “And that’s the big part: having industry and getting the Aboriginal community to connect.”

Employment agencies like Gezhtoojig work with unemployed and underemployed Aboriginal workers, while AABO acts as a point of contact between the agencies and trade unions. AABO can also arrange community information sessions in which unions explain their industries and the various careers available to Aboriginal workers.

The North Central Link Committee, which covers the Sudbury area, is one of six such regional steering committees across the province; two additional Northern Ontario committees cover the Timmins and Thunder Bay areas. Members meet every three months to discuss upcoming projects and labour supply in the area. It’s then up to the training and employment agencies to ready Aboriginal workers for apprenticeships.

AABO’s executive director, Sara Monture, said the organization has had to overcome some misconceptions about Aboriginal workers.

“I think, probably, the first thing they always think is that we’re asking them to lower qualifications or to slide people in,” she said. “Well, that’s not it at all; that’s not good for anyone on any level. We’re looking to send a job-ready, qualified candidate.”

Trade unions are getting screened candidates who’ve met with a career counsellor to determine their level of job readiness, Monture said. If a candidate isn’t ready, he or she will receive training to get to that state.

Now that AABO has the ear of industry, its goal is to increase participation, she added.

In consultation with the trade unions, the employment agencies can develop training tailored to meet the requirements of industry. Last year, in response to industry needs, Gezhtoojig developed the 15-week line crew ground support program, which trains workers to support powerline technicians in the energy industry. Once graduates come out of the program, they have a solid foundation to continue working in that field, go on to an apprenticeship, or transfer their skills to other industries.

“Every trade union has specific criteria for what they need for employment to get them rolling,” said Rheal Gelinas, a representative with Local 2486 of the United Brotherhood of Carpenters and Joiners of America. “So every Link Committee knows what every building trade criteria requires in order for us to hire some of their clients.”

By working with the Link Committee, the unions are seeing more qualified candidates, from across the province, that they might not have seen before, Gelinas added.

Having in-house training facilities means the unions can even bring in candidates for a few days of testing to help them determine if they like it. And if candidates show more aptitude for a different trade, the unions are happy to refer candidates to each other.

“My biggest motto is ‘Don’t start something that you don’t like,’” Gelinas said. “It’ll be a career choice, and if you don’t like it, you’ll be miserable for your whole career.”

“We have a local, available workforce willing to learn, willing to work,” said Iannucci, whose union represents plumbers and pipefitters. “Why go abroad and bring someone in when they’re right here, more than capable of doing the job, both men and women. It’s a pretty good fit. I’m glad to see we’re finally connecting.”

Sarazin said the message — that working in the skilled trades is a valuable option for employment — is getting out to Aboriginal communities, especially in the Northern, more remote regions. It helps that trades are often appealing to Aboriginal workers for the type of lifestyle it affords.

Economic recovery plans outlined in provincial budget
Nov 6, 2020 12:18 PM
Comments
We welcome your feedback and encourage you to share your thoughts. We ask that you be respectful of others and their points of view, refrain from personal attacks and stay on topic. To learn about our commenting policies and how we moderate, please read our Community Guidelines.