These Northern Ontario industries are primed for growth 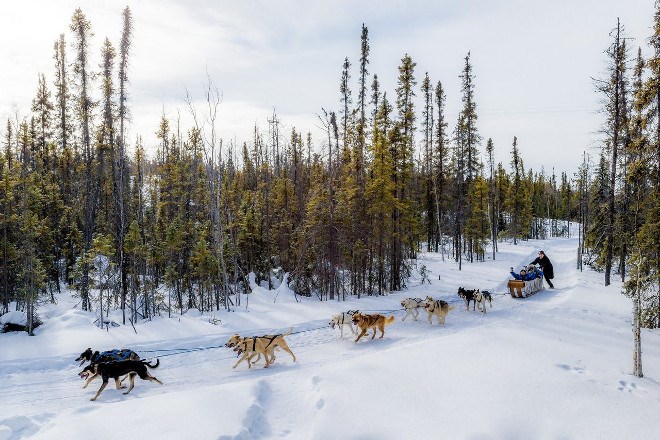 Indigenous tourism is one of the growth industries that a tourism leader says must be capitalized on. (Indigenous Tourism Canada photo)

The design possibilities, aesthetic elements and green values behind the mass-timber construction movement have architects, engineers and builders in Canada’s largest housing market increasingly warming up to wood, according to Christine Leduc, public affairs director for EACOM Timber.

“Timber is making a comeback, and it’s coming to Toronto.”

Leduc was one of the three speakers selected for a panel on future regional growth industries at the Northern Policy Institute’s State of the North conference in Sault Ste. Marie, Sept.26.

The Montreal-based sawmilling giant has six operations in Northern Ontario, including its engineered I-joist mill in the Sault.

With lumber prices crashing and producers being severely impacted by U.S. softwood lumber tariffs, mass-timber construction projects in the Greater Toronto Area represent an exciting prospect for companies like EACOM.

Mass-timber construction uses glued lumber to form panels, beams and columns that can be used for tall wood structures like high-rises.

The Ontario government’s unveiling of a new provincial building code in 2015, allowing wood-framed buildings to go from four to six storeys, was a formative step for the industry to move beyond single-family home construction.

British Columbia is Canada’s leader in this construction category with the 18-storey Brock Commons demonstration project in Vancouver, a 404-bed University of British Columbia residence building.

Now tall wood is coming to Toronto with The Arbour, a 10-storey mass timber building for George Brown College’s waterfront campus. Construction gets underway in 2021. A 14-storey academic building is planned for the University of Toronto.

With talk of more such projects in the works, the Ontario government invested this year in the province’s first cross-laminated timber plant in St. Thomas.

To provide more inspiration, EACOM hosted a group of southern Ontario architects and engineers in mid-August to tour the company’s sustainably managed woodland and mill operations in Timmins.

Leduc hopes that drives interest and creates a connection between southern Ontario urban dwellers and the Northern communities that depend on forestry for their livelihood.

“We’re just getting started because there’s a lot of momentum around us.”

Another “massive” opportunity that’s little known to most Northerners is the burgeoning global electric vehicle and lithium-ion battery markets.

Yet all the coveted ingredients of lithium, nickel and cobalt to feed that sector are in great abundance in this region, explained Trevor Walker, president of Frontier Lithium.

His Sudbury-based junior mining company is patiently waiting on North America to catch up with the rest of the world on the electric vehicle growth curve.

According to analysts, Walker said sometime between 2022 and 2025 there will be price parity between internal combustion engines and electric vehicles.

“It’s at that point that consumers making decisions will start to buy and consider electric vehicles.”

His company has a lithium deposit 175 kilometres north of Red Lake in northwestern Ontario. The Pakeagama Lake Pegamatite (PAK) project is the “highest quality lithium resource in North America” and the second largest, Walker claims.

With plans to build a demonstration concentrator at the PAK site within two years, Walker sees a huge opportunity to revive the manufacturing base in the Great Lakes region with a fully integrated supply chain catering to electric-vehicle makers.

“Rather than just mine it and ship it (offshore), how do we get that added value for the North?” he said.

Based on his high-level conversations, Walker said the North’s lithium potential is not lost on provincial leaders.

International markets are demanding Indigenous tourism products, said Kevin Eshkawkogan, executive director at Indigenous Tourism Ontario, pointing out that one in three visitors from France and Germany want that kind of experience.

Ontario has “by far” the most Indigenous tourism businesses in Canada – 50 per cent being in Northern Ontario – but according to his scorecard, this province ranked 10 out of 13 provinces and territories by way of government support.

Eshkawkogan is determined to address that disparity.

If his not-for-profit organization were to implement its strategy, he estimates the impact on Northern Ontario’s GDP would be $200 million.

To move the yardsticks forward, Eshkawkogan said Indigenous operators can’t do it alone but need partnerships through hotels, restaurants and transportation services.

Indigenous tourism, he explained, is more multi-faceted than just entertainers “who stand in their regalia, dance and walk away. We have a story to tell, and we need to tell that story on our terms.”

One way to tell that story in a “modern way,” he said, is the growing popularity of Indigenous food tourism.

But to get the conversation started, Eshkawkogan encourages outreach between tourism groups to have meaningful dialogue to plan mutually beneficially projects.

“We can work together to grow the industry and the economy collectively so we all benefit.”