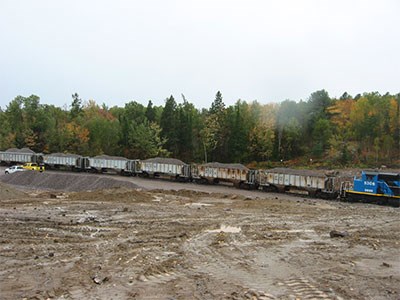 Chief Isadore Day came up with the idea after the community expressed concern that there are no regulations in place for closed-cage aquaculture sites as they relate to First Nations territories.

The community signed a memorandum of understanding with AgriMarine Holdings in 2011 to undertake a prefeasibility study on a closed-cage aquaculture project on the First Nation.

Comprised of community members who will be appointed and trained as commissioners, the panel will invite provincial and federal representatives to the table to join the conversation.

Funding has already been granted to the project.

“It’s a process that will establish all the right building blocks and environment for community decision-making where the environmental discussion is taken away from the politics of the community and actually just look at factual, empirical and quantitative data that relates back to environmental sustainability,” said Day, noting that Blu- Metric out of Sudbury has been retained to help build the panel.

The panel would review any and all projects that could have an impact on the community, whether it’s large-scale mining or a gas bar installation.

Each project would be assessed through a triple bottom-line accounting approach that considers the land, the people and the economic opportunity before approving any project.

Taking an on-the-ground approach to project review allows for early consultation with the community, and Day believes this will be a more common approach in the future.

He sees it as an essential part of the community’s economic strategy currently in development.

Too often, he said, projects get mired in the political process, causing the project to fail or drag on for years. Removing the environmental discussion from the political table immediately creates a sense of integrity because decisions are being made based on empirical, statistical evidence.

“What we’re doing is separating, not the final decision, but the assessment and the level of scrutiny away from the council table and charging the environmental review panel and the commissioners with the ability to provide the recommendations based on sound assessment,” Day said.

Currently being assembled, the panel should be up and running the end of July, at which time the commissioners will meet and start discussing the first projects on their agenda.

Serpent River has simultaneously set up its Community Economic Development Opportunities group. Working with the NORDIK Institute at Algoma University in Sault Ste. Marie, the group is developing seven discussion papers, which are being designed to generate discussion, propose models and generate options for economic development.

The first paper, which has already been developed, looks at the Indigenous World View. Others include Community Economic Development: 2013 and Beyond, Sustainable Development, and Comprehensive Community Planning.

These are all building blocks to give the community a strong footing when it comes to making decisions surrounding economic development, Debassige said.

Projects currently on the books include a water treatment plant, for which Serpent River was just awarded funding, the Elliot Lake water lot program, a solar project, the aquaculture project, and an LED lighting project.

Anchor tenants are being sought for a Centre of Excellence for Sustainable Development, an economic development hub that will house tenants that are in line with the community’s concept of sustainable development, Day said.

The review panel, the lands registry office, the construction company and others will have tenancy in the hub.

Day hopes to see these projects follow the success of the community’s rail program. Over three years, the community has operated a quarry to supply ballast, a spur line for transportation, and an experienced labour force of about 15 men.

“That’s quite a success, because any profits or royalties have been taken out and the band has benefitted from that,” Day said.

“We don’t owe anything to anybody and have gained credibility in the industry, established a strong labour pool and capacity, and there are other opportunities coming out of this as we speak.”

The community is also looking to expand its role in the tourism sector. Debassige said Serpent River is exploring the possibility of membership with the Great Spirit Circle Trail, a M’Chigeeng-based outfit that offers experiential tourism to visitors to Manitoulin and the North Shore of Lake Huron whose primary market is the motor coach industry.

Elders currently gather at the trading post in Serpent River, and Debassige would like to see motor coach visitors stop by for firsthand storytelling.

“What we’re doing, essentially, is creating a cultural living heritage museum,” Debassige said. “When tourists are coming in and they want to learn about Serpent River and the past, the elders are right there to tell the story.”

There are also plans to develop a medicine walk with the elders, but Debassige said those plans are in the early stages, and logistics—such as how long visitors are willing to stay in the community—need to be worked out before the idea comes to fruition.