Information on government programs is available at every turn, but what are the tangible ways in which it can be used to assist First Nations with sustainability? The inaugural Lands and Economy Summit, held in October in Serpent River First Nation,
Dec 5, 2013 2:22 PM By: Lindsay Kelly 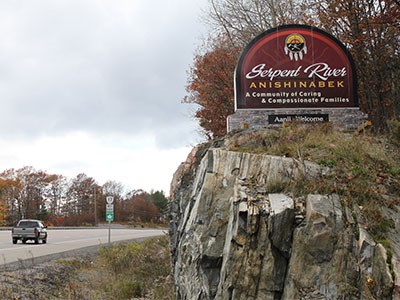 Serpent River First Nation, located along the north shore of Lake Huron, is developing an Environmental Review panel that will review development projects on reserve and territorial land before they go forward.

Information on government programs is available at every turn, but what are the tangible ways in which it can be used to assist First Nations with sustainability?

The inaugural Lands and Economy Summit, held in October in Serpent River First Nation, attempted to answer that question. Citizens, government representatives and industry gathered for three days to share ideas on how to encourage sustainability amongst First Nations communities.

“A First Nation is like a little country; we have rights and jurisdiction in a lot of different areas: education, health, infrastructure, economic development, environment—the list goes on and on,” Serpent River Chief Isadore Day said. “What we’re talking about here today…is how can this stuff work in the grand scheme of moving our communities forward.”

True collaborations between First Nations, government and industry partners are required in order to bring economic development and prosperity to those communities in a positive way, Day said.

“We can see a web of interconnectedness and interdependence on one another here, and this is not just an information-based presentation,” he said. “We’re now feeding into the discussion of where we go next.”

Serpent River has been active in pursing and creating economic development opportunities. It’s currently wrapping up a successful three-year project rehabilitating the Huron Central Railway, and has now set its sights on developing additional markets for the ballast it’s quarrying as part of that project.

The community has received $38,000 in provincial funding to conduct a preliminary technical and financial feasibility study for a solar farm, in partnership with Ottawa-headquartered Jazz Solar, and plans are in the works for a Centre for Sustainable Development, an economic development hub.

But Serpent River’s centrepiece is its Environmental Review Panel, which would review any development projects for their impact on the community before getting approval.

The community has been working with Sudbury environmental engineering firm WESA over the last year getting the structure in place.

Comprised of representatives of Serpent River, various levels of government and other non-government organizations, the panel would have oversight on reserve land and the traditional territory of Serpent River, explained Lynn Moreau, an environmental scientist with WESA.

“The mandate of the panel is to establish shared jurisdictional responsibility for advancement, review and development of natural resources proposals within the traditional territory of Serpent River First Nation,” Moreau said.

The panel will hold 12 meetings a year with a revolving structure that would allow new membership from the community, using consensus to make decisions. Its objectives will be to review economic development projects proposed by Serpent River within the territory and provide a mechanism for objective scientific review, Moreau said. Consultation with community members and adjoining communities would take place throughout the process.

Under consideration will be a project’s impact on the environment such as the water, earth, vegetation and animal populations, as well as the culture, such as hunting, fishing and trapping grounds, sacred sites and burial grounds. The panel will also weigh the benefits of infrastructure, employment, the economy and social impacts, Moreau said.

“Community consultation…will be occurring in parallel with the ERP process and it will utilize the existing consultation protocols that are in place and we will be obligated also to externally consult for projects where Serpent River is a proponent,” she said.

Proponents will have to pay an application fee, which will allow screening to take place and provide a security fee for projects that are approved. It will also ensure funds are available if a site has to be remediated, Moreau said.

Terms of reference and a screening report have been drafted and the orientation of committee members has been completed. The next step is to clarify government involvement and representation, she added. Ross Assinewe, a project officer with the Serpent River Economic Development Corp., said he’d like to see other communities adopt the ERP process.

“I support this initiative 100 per cent but also believe we need to look outside the box and look at getting all First Nations on board with this program,” Assinewe said.