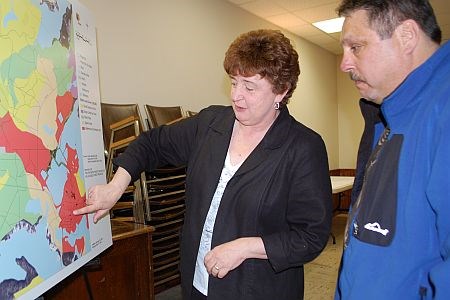 But the president of Two Feathers Forest Products, near Dryden, won't complain too much if it brings hope and delivers jobs to Aboriginal youth in a struggling part of northwestern Ontario.

“This gives me a great joy,” said Favelle, who is also a councillor with Wabigoon Lake First Nation. “This is a celebration and I see it being a way to help our youth and give them the power to dream. It's a real life-time opportunity.”

This spring, Favelle was hosting a series of open houses in school gymnasiums, community halls and a curling rink from Vermilion Bay to Balmertown to publicly showcase the proposed two-site, two-factory project at Red Lake and near Dryden. He also heard public concerns as part of the government's environmental assessment process.

It's one more regulatory milestone that edges a 15-year-old dream by First Nation leaders toward building a manufacturing base that will create 129 direct jobs, mainly in Pikangikum and the Eagle Lake First Nations, as well as countless more in harvesting and trucking.

Assisting them is Wood Tech, a 30 per cent owner, which specializes in the design, manufacturing, training and developing turn-key value-added wood facilities. They have signed a 10-year management agreement to handle equipment installation, operations, marketing and to help train the locals.

“We're the only ones doing it in all of Canada,” said Favelle. “The type of technology we're bringing to this – this is a benefit to northwestern Ontario and all of Canada."

“Through training, we'll be creating a new type of education, curriculum, new certifications and how to do forest sustainably.”

Logs from the Whitefeather Forest at Pikangikum will be shipped to a sawmilling and kiln drying plant in Red Lake. The site will have log sorting and wood chipper stations, along with a 9.9 megawatt biomass co-generation plant supplying power for the operation and the Ontario grid.

Sawn lumber will trucked 200 kilometres south to Eagle Lake, near Dryden, where it will be made into building components for pre-fabricated cottages for export.

Wabigoon Lake First Nation will be the administrative headquarters.

Though no site preparation work is underway pending final approvals from Ottawa, Two Feather proponents hope to start construction in 2011.

Many years in the making, the Two Feathers project goes back to the early 1990's and led to a business development partnership five years ago to pursue value-added manufacturing opportunities. The communities later brought in the Wood Tech Group from Finland with aims on shipping to high-value export markets.

Favelle said the communities are working on finalizing a training program to get Aboriginal people trained for forestry jobs and eventually management and financial positions. She points to the future with residents such as Wabigoon Lake's Tyson Williams, a Lakehead forestry student, who received the school's prestigious J. Michael Waldram Memorial Model Forest Fellowship award last winter.

“He's a promising star of ours, but we need more.”

A main focus on his community is encouraging young people to get their high school diploma or return to finish off those last few credits.

“If you want an opportunity, you need an education."

The open house in Dryden was the last step in a government-required screening process to solicit feedback from the public.

The screening is a fully-detailed project analysis outlining their plans to mitigate any environmental impacts. The plan was to be filed in mid-June to the lead agency, the federal department of Indian and Northern Affairs. An approval can take take two to four weeks.

Gord Wickham, a Thunder Bay environmental consultant for the Two Feathers group, said the First Nations' approach to this development has been a refreshing experience.

“It's a more holistic approach and it's a more net gain approach. It's not about minuscule and myopic issues that we sometimes like to wave the flag on. It's more relevant stuff and the overall benefit to the land in terms of using and respecting it.

“It's a whole different mind shift than the urban environmental work that I've been doing.”