A proposal to develop a permanent nuclear waste storage facility on the north shore of Lake Huron is causing controversy amongst the area's First Nations communities.
Dec 21, 2011 4:22 PM By: Northern Ontario Business Staff 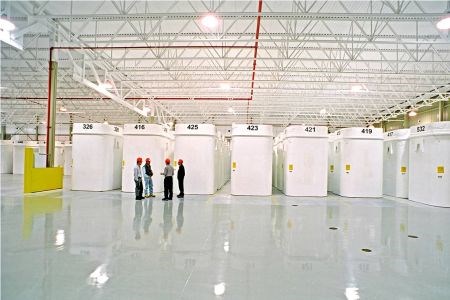 Three communities along the north shore of Lake Huron have expressed interest in hosting a nuclear waste repository on behalf of the Nuclear Waste Management Organization. Casks, such as those pictured, are currently stored temporarily at plants, but the organization is seeking a more permanent solution.

A proposal to develop a permanent nuclear waste storage facility on the north shore of Lake Huron is causing controversy amongst the area's First Nations communities.

Mike Krizanc, a spokesman for the Nuclear Waste Management Organization (NWMO), said three northeastern Ontario communities along the north shore of Lake Huron have expressed interest in becoming a host site for a nuclear waste repository, namely Elliot Lake, Blind River and the Township of the North Shore.

The Elliot Lake and North Shore Corporation for Business Development is the coordinating body for those three communities.

Other interested Northern Ontario communities include Ignace, Nipigon, Schreiber, Wawa and Hornepayne, as well as one in southern Ontario, Saugeen Shores, and three in Saskatchewan.

In December, senior NWMO staff met with each of the municipalities, including communities in northwestern Ontario and Saskatchewan, that have completed the first phase to talk about what the feasibility studies would look like.

“This is a two-year study and at the end of that will hopefully whittled down to one or two communities,” Krizanc said.

The Township of Ignace recently decided to move past the information stage into a feasibility study. Krizanc expects more communities will do the same over the next few weeks.

“They got the results of their initial screenings over the summer months and some of them wanted to jump into the next step.”

Some municipalities have even hired extra staff for special “visioning” and local strategic plans with funds provided by the NWMO.

The extensive nine-stage process, which can take up to a decade, will shortlist and finalize a site for a 500-metre deep repository which has the potential to provide hundreds of handling and storage jobs.

But the municipalities' efforts are getting some major pushback from First Nations communities in the area who say they don't want the waste.

In a statement, council chair Lyle Sayers, chief of Garden River First Nation, said the council “strongly rejects” the prospect of the North Shore becoming a site for the long-term storage of nuclear waste.

“We cannot stand idly by and watch as they inject Mother Earth with this cancer,” Sayers said. “We must ensure that the future natural resources of this area are there for our children, generations to come, and businesses alike.”

Sayers said Elliot Lake's history of uranium mining resulted in “significant and lasting environmental damage to the local watershed and nearby ceremonial grounds.” He added that dozens of tailings ponds in the area are yet to be disposed of, and suggested that no site is ever totally safe for nuclear waste storage.

“Natural disasters sometimes happen, such as we've seen in Japan,” Sayers said. “It could make this whole area a nuclear wasteland suitable for only that industry.”

He cautioned the Canadian Nuclear Safety Commission and the NWMO against spending financial resources on a study for the area, stating, “a nuclear waste dump is not going to happen here.”