With First Nations representing an ever-increasing portion of the Canadian population, Northern Ontario universities are using a number of ways to engage and accommodate them.
Apr 14, 2010 1:02 PM By: Nick Stewart 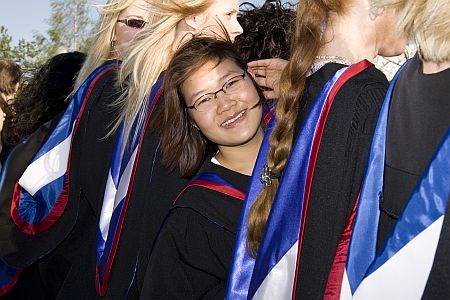 Universities across Northern Ontario are seeing rising numbers of Aboriginal students enrolling and graduating, due in part to stronger efforts to accommodate and respond to specific needs. (Photo supplied)

With First Nations representing an ever-increasing portion of the Canadian population, Northern Ontario universities are using a number of ways to engage and accommodate them.

At Thunder Bay’s Lakehead University, officials point to the Native Access Program, a nine-month transitional year to prepare new Aboriginal students to become familiar with university life, and even with the city.

“What we’ve done is develop a structured model that works for some, depending on the level that they’re at,” says Gloria Hendrick-Laliberte, coordinator of the Native Access Program.

“It gets them used to meeting deadlines and view their education as a job, while learning how to network and work together.”

Participating students come from Aboriginal communities throughout Canada, from British Columbia to Nunavut. The program involves five courses, three of which count for university credit and two which serve to develop and enhance study skills.

To make the material relevant to participants, each course contains a set percentage of Aboriginal content. The science course has a 50 per cent balance, and uses Native science as a comparison against the European approach. Conversely, English class features works and plays by Aboriginal authors.

This customized focus works alongside other considerations built into the program. As many participants have young families, classes don’t start until 10 a.m. and will not extend past 4 p.m., allowing for appropriate childcare options, says Hendrick-Laliberte.

These considerations have allowed uptake to grow in recent years, with an average 45 to 50 per cent completion rate, something which Hendrick-Laliberte says is a positive trend given the lower statistics seen elsewhere.

Paul Berger, acting chair of the department of Aboriginal education at Lakehead’s faculty of education, says such measures have also enhanced projects taking place within his department.

These include an 18-hour, Aboriginal education course for all new teachers, a Native language instructors program, and a Native teachers education program, which encourages First Nations students to pursue a bachelor of education concurrently with another degree program. A particular point of pride, he says, is the honours bachelor of education, with a specialization in Aboriginal teaching. The first cohort of the program began in 2008, and Berger says most of the students have arrived through the Matawa Tribal Council and are from different Near North First Nations.

The program is offered for six weeks in the summer, with some course material being delivered via videoconference to places like Fort Hope and Webequie First Nation.

This approach is important, says Berger, as many of the students are already teaching in some form in their communities, and either cannot afford to take the time to interrupt their work schedule, or have no desire to uproot their families for the duration of regular post-secondary study periods.

“Any initiative to make things easier and remove those bottlenecks is a good thing.”

This approach is also built into certain efforts at North Bay’s Nipissing University, which in the fall, of 2009, instituted a new Office of Aboriginal Affairs.

Though still new, the office acts as a single point of contact for students, communities and researchers while also streamlining the integration of programming, curriculum, research, support services and cultural activities across the school.

At Laurentian, the Aboriginal presence has grown for both students and educators over the last two decades. While the percentage of the population wasn’t tracked for many years, Cote-Meek estimates that there were roughly 300 Aboriginal students at the school through the mid-1990s, as opposed to the 936 on campus today, making up 10.9 per cent of the student population.

Similarly, there are now roughly 12 Aboriginal faculty, up from the five seen through the 1990s.

Cote-Meek credits this rising interest in the school to Laurentian’s dedication to improving access and support for Aboriginal students.

“When institutions are responsive to their needs, then they’re more likely to enroll in that institution, and I think Laurentian’s done some really good work in that particular area,” says Cote-Meek. “We’re trying to make the institution more open and welcoming to Aboriginal students so we’ve seen an increase.”

These efforts have included a broadening of support and culturally-based services, including the hiring of a native student counsellor, learning strategist and recruitment officer. These individuals work, not only with Laurentian students, but also with school boards to help smooth the transition to post-secondary environments. A young Aboriginal women’s summer leadership conference was held last summer, and a related conference is slated in the coming fall.

To help more students stay in their communities, Laurentian’s school of Native social work is currently working on an agreement with the Manitoulin area to deliver the community-based program.

In February, Laurentian received more than $800,000 in provincial funding, half of which is slated to support many of these programs.

The remainder will be used to increase outreach to Metis, for which there is a gap in services at the school, says Cote-Meek. Fourteen per cent of Francophone students currently identify themselves as being Metis, representing a segment of the university population that will soon be targeted for better support, she says.

Elsewhere on campus, fundraising efforts are still underway for a new Indigenous Sharing and Learning Centre, which is slated to begin construction on campus grounds by 2012 or 2013, says Cote-Meek. The $3-million project is designed to enhance native support services, and would feature a student lounge, a medicine garden, as well as teaching and gathering areas for Aboriginal and non-Aboriginal students.