Whether Ryan Parisien’s clients are drill rig operators camped out in the bush, or executives sitting around a boardroom table, the head chef demands all his clients get professional service with a smile— and only perfection will do.
Jul 3, 2013 2:50 PM By: Lindsay Kelly 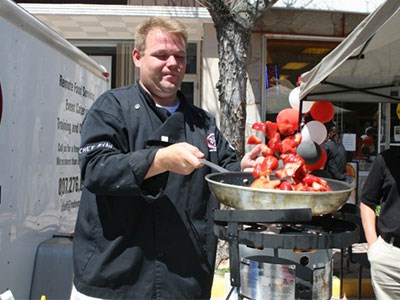 Whether Ryan Parisien’s clients are drill rig operators camped out in the bush, or executives sitting around a boardroom table, the head chef demands all his clients get professional service with a smile— and only perfection will do.

“I have a saying in my company: if it’s not perfect, (the food) doesn’t go out. Period,” he said. “I tell my staff I’m not hard to work for, you just have to produce perfection.”

Those are high stakes, but requiring top-level performance has helped NDC Food Services, based in Fort Frances, to build a reputation for excellence over the last two years.

The company, one of several economic development initiatives established through the Naicatchewenin Development Corporation, takes a three-pronged approach to food services.

Parisien and his staff of seven can provide catering services to remote mine or line-cutting sites, or cater any type of event, from corporate galas to kids’ birthday parties.

“I essentially do a Gordon Ramsey on them, but not that mean,” he said of the acerbic TV celebrity chef.

The company began when mining activity in the area began to pick up, and Parisien saw a chance to service the companies that would need to feed their workers as they moved north.

Rather than a Toronto company getting all the business, he envisioned a local company nourishing the mining camps with locally sourced homemade and healthful food, while providing employment for local residents.

NDC provides the structure, but Parisien is given the freedom to guide the food services arm as he sees fit.

“I believe very strongly that northwestern Ontario has everything we need right here to be able to service northwestern Ontario,” Parisien said. “That includes the workforce and all the resources that are necessary in order to become successful. I think we can find them right next door.”

Parisien, who is of Métis descent, grew up in the food industry. At 12, he was peeling potatoes and assembling club sandwiches at local restaurants. He then set off across Canada, working in more than 20 establishments, learning as he went.

After purchasing college textbooks, he taught himself the elements of cooking without ever enrolling in a class.

He started a Chef de Cuisine apprenticeship in 2002 and fast-tracked through until he passed his Red Seal certification in 2003.

He even did a stint teaching a collegelevel culinary course at Seven Generations Education Institute and today hires graduates from the same course he helped develop.

“It’s all I’ve ever really done,” Parisien said. “I travelled the whole country just learning and soaking up as much knowledge as I possibly could until I became the teacher. I do have a huge passion and drive for it.”

While there are other catering companies in the area, Parisien is confident there’s a piece of the market for everyone. Still, he makes no bones about where his ambitions lie.

“Really, the goal there is that I want the entire Ring of Fire,” he said, with a chuckle.

While companies figure out how to exploit the subsurface wealth of the James Bay Lowlands, Parisien is building capacity, honing his skills and getting ready for the anticipated rush. Saskatchewan and other booming areas of Ontario are also on his radar, but his immediate goals are to target the mining activity in Emo and Black Hawk.

Parisien’s aim is lofty and it’s part of a long-term plan, but it’s that fast-paced, ever-evolving nature of the industry that keeps him hooked.

“There’s always change, there’s always a necessity for versatility, you always have to adapt and think on your feet, and in my opinion that’s one of the great things about this industry,” he said.