Brian Young didn't let misguided advice deter him from making his company a success. Instead, it inspired him. “I was told because I was native, I would not succeed,” said the owner of Young Forestry Services .
Jan 17, 2013 7:09 PM By: Liz Cowan 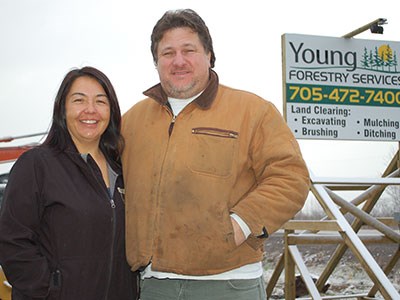 Lorie and Brian Young have grown their forestry services company into a successful venture.

Brian Young didn't let misguided advice deter him from making his company a success. Instead, it inspired him.

“I was told because I was native, I would not succeed,” said the owner of Young Forestry Services. “I don't let anyone tell me I can't do anything.”

Since 1996, Young, and his wife Lorie, have been proving the early naysayers wrong. The business, located on Hwy. 17 between Sturgeon Falls and North Bay, has grown from four to about 20 employees. It moved from rented space in Dokis First Nation to its new location on a Nipissing First Nation-owned industrial and commercial park fronting on the highway “We needed a bigger yard, since we work on our own equipment. We do all our own mechanical work,” Young said.

Lorie, who was doing all the administration work from home, quit her full-time job and hired another office worker to keep up with demand.

Young started by undertaking contract silviculture work with some area forest management companies. When lumber prices started to fall, and contracts for the company decreased, Young had to look for work in other areas.

“We did harvesting and cut firewood for a few years,” he said. “A few times we were ready to pack it in.”

Then, the company was offered an opportunity with Union Gas to do some work clearing right of ways.

“We worked with them for a couple of years and then they awarded us as prime contractor for their right-of-way clearing for the whole province,” Lorie said. “They gave us a chance and we proved we could do it.”

The company was working throughout the province and received good feedback for the job it was doing, including from landowners.

“Our name got out to other utility companies and soon TransCanada Pipeline contacted us and now we have work with them doing the same thing,” Young said.

It also does brushing for Goldcorp along a 200-kilometre power line in northwestern Ontario.

“We are growing a lot faster than anticipated and we are getting calls from contractors so we are trying to keep up with demand,” Lorie said.

Finding people to do the work is a challenge since travelling is involved. However, when possible, the company hires First Nation staff.

“We have people from Moosonee and Quebec and whenever we go into an area where there is a First Nation community, we try to hire from there. We contact them and let them know we are a native company and then ask if anyone is looking for work,” she said.

Young said it does help that the company is native-owned, and he does promote that it is. However, it also puts it in the spotlight.

“Maybe they hire us because we are native but we have to be better than the last company they hired,” he said. “It puts more pressure on us and everyone just waits for us to screw up.”

That's why he focuses on safety and having his workers do the best job possible.

“We went over and above and bought pretty expensive equipment to do the job,” Young said. “But now we have a good track record and everyone is satisfied with the work we do. We have some really great references.”

There are not many native companies offering the services it does and being small means it has to compete with other bigger companies.

“We started small and now we are growing every year,” he said. “We do all our own maintenance on our equipment and I am also a certified trainer so I do all of that. We are pretty self-sufficient.”

While running the company means working long hours and travelling, the couple just booked a family Christmas vacation to a warm destination.

“It will be a holiday for them but I am bringing my phone,” Young said. “There is always work to do.”