It took 16 years for Brigitte McLean to reach her goal of opening a spa, but her ambitions haven’t ended. “It took a long time to get here and now there is no stopping me at this point and dreaming never ends.
Jul 10, 2013 7:41 PM By: Liz Cowan 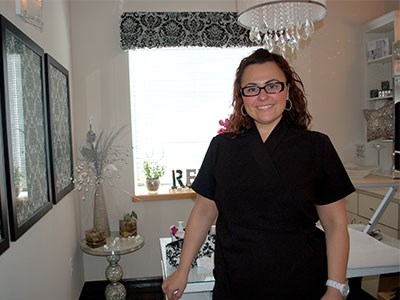 Brigitte McLean realized a 16-year dream when she opened her spa in North Bay last year.

It took 16 years for Brigitte McLean to reach her goal of opening a spa, but her ambitions haven’t ended.

“It took a long time to get here and now there is no stopping me at this point and dreaming never ends. Once you realize one, it doesn’t mean they have to stop,” she said.

Tranquility Spa, located at 60 Champlain St. in North Bay, has been open for a year. It started with two employees and it currently has five.

She also shares space with a chiropractor who has his own staff. McLean, who is Métis, attended a prestigious esthetics school in southern Ontario that only took in 12 students from around the world each year.

The certification allowed her to become a skin care consultant with the organization and she was its senior educational service representative.

She travelled throughout the U.S. and Canada to train doctors, plastic surgeons, estheticians and nurses on specific skin surfacing techniques, such as microdermabrasion, which was developed in the 1990s.

After meeting her husband, they decided to move to the North to raise their children and they settled in North Bay.

“I realized when I moved here I was going to have to put my career to the side a little bit to have a family. So I worked in a small spa here for about a year or two then I went into teaching esthetics for about seven years,” said McLean. “But during that time I never stopped doing hands-on esthetics and had a business in my home. I knew one day I would have my own spa and that was my goal and objective since the moment I started and it was always in the back of my mind.”

When her two children were attending school full time, she spent two more years working out of her home and building up a clientele.

With encouragement from family and friends, and some guidance from the Business Centre: Nipissing and Parry Sound, she was determined to open a spa. She also found there were financial opportunities for her.

“I am no longer a young entrepreneur and I thought those opportunities weren’t there for me,” she said. She received help from the Waubetek Business Development Corporation, which is an Aboriginal- wned and controlled organization that delivers business financing and economic development services to First Nations and Aboriginal entrepreneurs in northeastern Ontario.

“The process took about six months or so, such as writing a business plan, and I finally settled on a location and did a lot of research. It has been a fantastic journey,” said McLean.

The spa offers facials, manicures, pedicures, waxing, body treatments and massage, including a registered massage therapist who offers services one day a week.

Clients can get non-surgical face lifting techniques, light therapy for those with acne or pigmentation problems and electrolysis, along with holistic esthetics such as reiki and reflexology.

“We all have our own specialty areas, so as a team, we do work well,” she said. Starting a business may not be for the faint of heart, but McLean said the process was fun.

“I get a little obsessive compulsive when researching things and trying to get the best deal and I like to be hands on. All the décor is from me and the overall vision is mine.

“I wanted to offer an experience – to experience the spa and not just the treatment.”

The reception area has a stone wall, fireplace and a water feature, and the treatment rooms have a calming and peaceful décor.

An expansion and a second location are being considered as part of her future plans. She also wants to bring in some new machines and new products that North Bay doesn’t have.

“I was taking a risk and I think that is what held me back a little bit. There is always a fear of failure but the passion is what drives you. You know, there is a need for it. I had so many people believing in me, that gave me the courage to do it and I left it in the hands of fate. I did everything I could do to get here, so let’s see what happens,” said McLean.