A 2012 Friendship Accord struck between Lac Seul First Nation and Sioux Lookout is already paying huge dividends if you judge the brisk foot and vehicle traffic through the local Tim Hortons.
0
Jul 9, 2014 1:46 PM By: Ian Ross 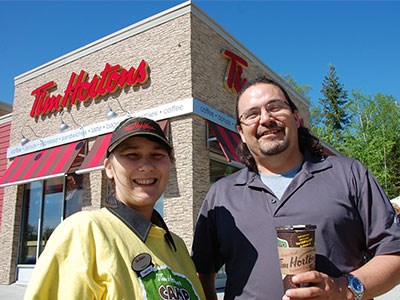 A 2012 Friendship Accord struck between Lac Seul First Nation and Sioux Lookout is already paying huge dividends if you judge the brisk foot and vehicle traffic through the local Tim Hortons.

Instead of residents driving an hour south to Dryden along moose-infested Highway 72 to Dryden to get a double-double fix, it’s now available in their own backyard.

The northwestern Ontario First Nation community of 1,000 is the proud owner of the franchise on the south side of Sioux Lookout, which opened last summer to great fanfare and a continuous outpouring of patronage.

Chris Angeconeb, Lac Seul’s economic development general manager, said it’s not uncommon for folks visiting from the remote fly-in communities to make a special detour from their in-town appointments to almost clean the place out of coffee and doughnuts.

“We have a tough time keeping the shelves stocked.”

But ownership of a fast food outlet is really only the window dressing of the steady progress Lac Seul has made on a number of fronts through partnerships and agreements in the energy, mining and mineral exploration, forestry and training fields.

Lac Seul is a collection of the three communities of Kejick Bay, Whitefish Bay and Frenchman's Head, 40 kilometres northwest of Sioux Lookout.

The 2008 signing of a settlement agreement with Ontario Power Generation over the construction of the Lac Seul Generating Station near Ear Falls has proven to be a real economic driver.

It delivered a 25 per cent ownership stake for the band in the 12.5-megawatt station and a hydroelectric supply agreement that delivers profits on their equity for the first 40 years of operation.

Along with another settlement on a longstanding timber claim, Angeconeb said the band was flush with “several million dollars” to start the kind of community improvement programs “that we wanted to do, rather than programs that Indian Affairs was funding us for.”

An extensive on-reserve road paving program began, followed by the construction of a new elementary school and a ribbon-cutting last year on a 1,300-seat arena and conference centre.

When mineral exploration took off, the band acquired and renovated a former public school in nearby Hudson into the Lac Seul Training Centre of Excellence, offering preparatory courses for mining, construction and other vocations.

The band negotiated several working agreements with mining and exploration companies operating in the area, none bigger than a milestone deal reached with Goldcorp that’s delivered many tangible benefits, including a $1-million donation for the training centre.

“They gave us a half-million to buy, renovate and start operations,” said Angeconeb, “and that was during the negotiations. It was their good faith measure to us.”

The band is exploring other avenues such as starting its own junior mining outfit and as one of the joint venture partners in the First Nations Mining Corporation, a business development and training initiative with SNC-Lavalin, Cementation and the Morris Group.

On the forestry side, Lac Seul received a measure of community control to manage its namesake forest unit when it was awarded a five-year enhanced forestry licence by the province in 2012.

Running a forest management corporation was a natural progression for members, said Angeconeb.

“We’ve done harvesting from time to time over the past several years. Many of us have worked on the road reconstruction, done silviculture planting and firefighting.
“All of the jobs you can actually have in forestry we’ve held at some point in time.”

And with the industry on the upswing, it’s put families back to work and go the fibre flowing to Domtar’s Dryden mill and at nearby McKenzie Forest Products, where half the workforce is Aboriginal.

Coming out of the Friendship Accord is a more altruistic initiative under consideration.

Lac Seul, Sioux Lookout and other partners are studying the feasibility of a not-for-profit logistics company and food distribution network to find ways to cut the horrendous costs associated with moving this freight to remote communities.

Overall, Angeconeb credits much of Lac Seul’s ongoing success with having continuity in leadership at the top with an experienced council and a long-serving chief in Clifford Bull.

“We actually have political leadership that is stable which gives the rest of us in managers’ and directors’ positions the ability to carry out what we’re doing.”

Sault-area resort to be repurposed as treatment facility
Dec 19, 2019 2:00 PM
Comments
We welcome your feedback and encourage you to share your thoughts on this story. We ask that you be respectful of others and their points of view, refrain from personal attacks and stay on topic. To learn about our commenting policies and how we moderate, please read our Community Guidelines.