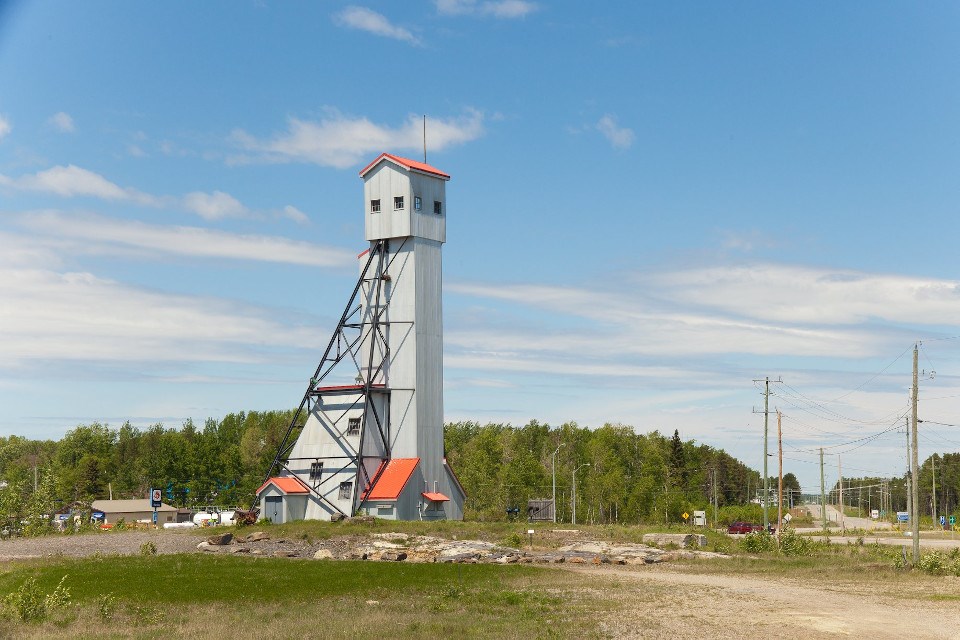 The MacLeod-Cockshutt Mine headframe on Highway 11, south of Geraldton, on the site for the Hardrock open-pit mine gold project. (Premier Gold photo)

Hopes have been raised – and dashed – over the years in training Indigenous people to take part in mine development in the often-delayed Ring of Fire.

The lack of government, community, and industry coordination has consistently moved back the project completion goal posts, leaving many First Nations trainees with no jobs in the pipeline to graduate into.

Three northwestern Ontario First Nation communities appear to have hitched their collective wagons to more of a sure thing surrounding a shovel-ready, open-pit gold mine project south of Geraldton.

Training begins shortly to prepare a homegrown workforce to cater to Greenstone Gold Mines' (GGM) Hardrock Project, a $1.3-billion mine that's being called a "generational" opportunity to build a local skill-set and know-how for this project and others in the Far North.

"We see this as kind of the building blocks for future projects like the Ring of Fire," said John Glover, CEO of Minodahmun Development LP.

Minodahmun (meaning "clear path" in Ojibway) is a partnership of Animbiigoo Zaagi’igan Anishinaabek, Aroland First Nation and Ginoogaming First Nation designed to maximize their participation and the benefits from mine projects.

The communities' traditional economy has always revolved around the cyclical forestry, Glover said.

"But this is really the first time these communities ever got chance to work on a mega-project and a large-scale operating mine. This is definitely a generational project and one that hopefully will be the building blocks for a lot more good things to come."

With consent from local First Nations, and federal and provincial government permit approvals in hand, the Hardrock Project is almost ready to begin construction.

Hardrock is expected to create 1,200 construction jobs and 550 operations jobs.

Anyone who wants a job will be able to get one, Glover said.

Greenstone Gold Mines doesn't intend to establish an accommodation camp for transient workers once in commercial production. The emphasis is on hiring locals.

"It's up to us to train members and it's up to members to seize those job opportunities because they're there for the taking," said Glover.

Of the 2,100 members in three communities, some have commuted to mining jobs at Musselwhite and Detour Lake, some went through past Ring of Fire-related training programs, while others need to be trained from the ground up.

To fill those hundreds of construction and mining jobs, Minodahmun is launching its Readiness and Essential for Employment Training (RESET) program beginning Sept.28.

The province invested $500,000 in the program with another $100,000 coming from the First Nations and the mining company.

Due to pandemic restrictions, Glover said they can accommodate 48 participants in total through three cohorts beginning in Aroland, Ginoogaming and in Thunder Bay for off-reserve members.

The first of the three-phase program is geared to helping people select a career path with essential skills and work readiness training, before transitioning into an introduction to the construction trades.

A second phase delves into pre-trades programs for careers such as electricians, carpenters and plumbers. The third phase involves enrollment in college and university-level Red Seal apprenticeship programs.

"We really want to remove barriers and put members in a position to succeed," said Glover.

There will be entry-level jobs for those who complete the first phase, he said, but the goal is for program graduates to ultimately reach managerial positions and gain skills as project geologists and engineers.

"We're looking to cater to everyone. Every community member has different goals," he said.

"Working with young people in the communty is a big focus of our program."

Aside from training and job placements negotiated in the IBA, there will be opportunities for local Indigenous-owned businesses to secure work through priority set-aside contracts.

Glover said they're looking to self-perform some contracts but in cases where they need to build capacity, they'll strike partnerships with experienced companies used to working with Indigenous communities.

One early example is Minodahmun's recent partnership with Forage M3 Drilling Services – currently exploration drilling on the Greenstone property – with their goal of getting as many Indigenous folks as possible involved in exploration drilling in the hope one day of starting a local Indigneous-run drilling shop.

"It's been a great relationship so far. They've hired members and the drills are turning in Geraldton as we speak," said Glover.

The First Nations view Geraldton as an emerging mining hub, not only to cater to the Hardrock Mine at the Highway 11 junction south of the town, but as a bedroom community and staging base to send material and personnel up the proposed north-south road into the Ring of Fire.

"We really want to turn Geraldton into a mini-Timmins and attract some mineral-based businesses and serve the needs of (Greenstone) and ultimately the mines up there," said Glover.

A big component of the Hardrock IBA was putting in "world-class" environmental safeguards, protecting the land and water.

For the past five years, the communities have placed environmental monitors around the Hardrock site, and will continue to do so over its initial 15-year mine life.

"They're kind of the eyes and ears on the ground for the communities," said Glover.

But having insisted on that, Glover said community leadership also recognized the need for economic development opportunities that provide good-paying, local jobs.

"The chiefs made it clear that the environment was key, but also they wanted to create jobs and opportunities for their members so they can excel and have a better life."