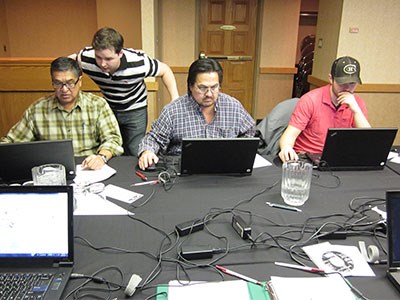 Jordan Shannon (standing) of Northern GIS works with First Nation communitites in land-use planning and mapping, and trains others in the use of this data collection technology.

Jordan Shannon doesn't have any Aboriginal bloodlines, but he still finds his Thunder Bay company carries a First Nations label.

Working alongside Aboriginal people to preserve their culture and tradition is an experience that the Atikokan-raised Shannon has treasured since he was a teenager.“I fell in love with the culture and we’ve carved a niche in the market for ourselves. It’s been fun and I enjoy helping these communities.”

GIS (geographic information system) technology is modern-day cartography that can store and display geographically referenced data on a variety of multi-level platforms that allow for better planning,management and analysis of information.

“GIS is only limited to the user’s imagination,” said Shannon.

When it comes to mineral exploration near remote First Nation communities, land-use planning is integral in building a foundation of trust and mutual respect between industry and Aboriginal people. GIS can be a great technological tool to avoid conflict and misunderstanding. Government and industry want boundaries on overlapping Aboriginal territorial lands by drawing lines on maps that previously never existed.

“These communities need to have a plan to prove they have sacred areas, burial sites or they’ve been using the land (for hunting and fishing) so that mining companies can’t come in and drill,” said Shannon. “If they don't have that, then it really hurts their cause as far as negotiating with industry and government.”

As a graduate of Algonquin College’s GIS Technologist Program, Shannon began plying his trade working in various contract positions for the Rainy River First Nations, for mining companies like OZ Minerals, and then for a spell in northern Alberta, web-mapping civil infrastructure for a collection of amalgamated communities.

“I’ve been toying with idea of my own company since college but I never could take that leap of faith.”

He finally established a home-based business in 2010 with colleague Brent Forsyth. They have since hired a third employee.

Shannon collected data for First Nation flood claims in the Rainy Lake and Lake of the Woods-area stemming from dam construction in the 1950s and 1970s.

There are plenty of horror stories of communities losing land, natural resources, and, in some cases residents being entirely displaced.

“We did a lot of elder interviews, sitting down with them and collecting their traditional knowledge in finding out burial sites, sacred areas, where it was flooded, and how it impacted the lives of the people.”

But to make inroads into those communities, he had to bridge a digital divide.

Some elders don’t always want certain historical information written down, much less stored as data. “It’s an oral culture and when it’s not passed down from the elders, it’s knowledge being lost,” said Shannon.

Today's Aboriginal youth don’t have the patience to spend weeks on the land with an elder learning about their past. Shannon said it's been an educational process to show communities how the information will be used and who gets access to it.

“We’ve explained we’ll do one map for the community, another for the Ministry of Natural Resources, and another for industry.” The community’s map is detailed with symbols of specific sites, but the copies given to the government and industry are more vague, containing only large red dots, indicating a buffer zone, rather than showing a pinpointed area.

“When we explain that this information is not only going to benefit them as far as flood claims and land-use planning, it takes it one step further as a teaching or history tool for youth. It’s pretty amazing how supportive and open they become with information.” With GIS software, the user can click on a map of a sacred area and up pops a video clip of an elder speaking about its cultural significance.

“It’s pretty powerful, especially after the elders pass on, when you see the videos and see the reactions from people in the communities, and how thankful they are that this information is being collected and stored.”

Eventually Shannon would like to see his clients use the data as a basis to draw up land settlements, mining impact benefit agreements, and for treaty negotiations.

“That’s what we’re trying to do. Having this information helps these First Nation communities take control of their land and go after flood claims, treaty land entitlement claims, and try to get financial compensation or some of their land back that they have lost.”

With limited government money for hiring consultants, the company assists their clients with GIS funding applications and also tries to train one or two locals in the technology.

“I tell every community that I just don’t want to come in, do the work, take the money and run. I’d rather leave something, behind whether it’s skills or creating a job for somebody in the community.” The company is now looking to diversify its client base by approaching small municipalities that don’t have the budget for GIS staff or are unfamiliar with its capabilities and may be open to training opportunities.

Shannon said they’re also discussing potential data management work with a Thunder Bay charity and the district health unit to create a platform that can map disease outbreaks or teen pregnancy issues by neighbourhood to better focus community outreach services. As for working with mining companies, on top of his Aboriginal clients, Shannon said that can be a fine line to walk given the natural tension between the two camps.

“First Nations are my bread and butter, that’s what I enjoy doing the most. It's been good to me and I try not to overstep my boundaries.

“But at the same time I would love to be that bridge. GIS can be a great tool. When the respect’s there, the conflict seems to go away.”