A northwestern Ontario First Nation community has been painstakingly assembling the wood building blocks for a community revival.
0
Mar 10, 2014 6:09 PM By: Ian Ross 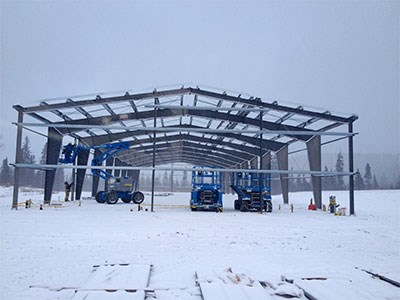 Bingwi Neyaashi Anishinaabek, a reformed Lake Nipigon Ojibway community, has constructed a new building to house a future sawmill which will be the foundation for future employment for its members.

A northwestern Ontario First Nation community has been painstakingly assembling the wood building blocks for a community revival.

Forest products will be the economic cornerstone behind the development of Bingwi Neyaashi Anishinaabek (BNA), an Ojibway community once displaced by the Ontario government in the 1950s.

Last August, the community held a land designation vote to ratify and proceed with a sawmill proposal.

“It was a long time in the making,” said Jordan Hatton, BNA’s lands and resources manager. “It’s a positive step for the people that want to see the community move ahead.”

Located on the southeastern shore of Lake Nipigon, the former Sand Point First Nation is a community that’s still very much in the planning stages.

There is no current infrastructure in place for housing and the community’s population of 250 off- reserve members.

Originally, there were ambitious plans calling for a large volume cedar sawmill, a wood pellet mill and a one-megawatt co-generation plant to power the community.

But the members told the leadership that was too much, too soon.

Instead of having a two-shift, 20-employee sawmill, the leadership are re-examining the business and marketing plan.

“They want us to start small and if it’s successful we can expand. We’ll build it incrementally rather than go big,” said Hatton.

Hatton said those forestry players that survived the industry downturn seemed to be smaller niche operators specializing in value-added products like saunas, gazebos, even non-timber forest products like cedar oil.

“If the U.S. housing market continues to improve we can look at producing actual lumber.”

In preparation for that, a 16,000-square-foot sawmill building was erected this winter by Bur-Met Contracting, housing two portable Woodmizer sawmills to use on site or in the field.

“We’re not set up for a finished product just yet,” said Guy Gladu, general manager of the Papasay Management Corporation.

“We’ll let the marketing plan dictate the direction that we go with the sawmill,” said Hatton, who could not disclose a price tag for the facility’s construction or equipment purchase.

Grants were provided by the Northern Ontario Heritage Fund ($1 million) and FedNor ($460,000) to develop an industrial park and build the sawmill. The community has also invested to ensure its completion.

“Once we figure out who’s planning on moving back and the energy requirements we can relook at the co-gen at that time,” said Hatton.

On the development front, the first 20 house lots have been surveyed, roads have been built and power lines installed. There are no set timelines when residents can move in.

The leadership has supported building a community around a manufacturing base.

Hatton said that was the vision of former chief Paul Gladu, who liked to say:

Another critical community vote is coming up in late March to approve a land code, which if passed, would free up the First Nation from 25 per cent of the Indian Act and all the sections related to reserve lands.

The development potential for BNA would then be “endless,” said Hatton.