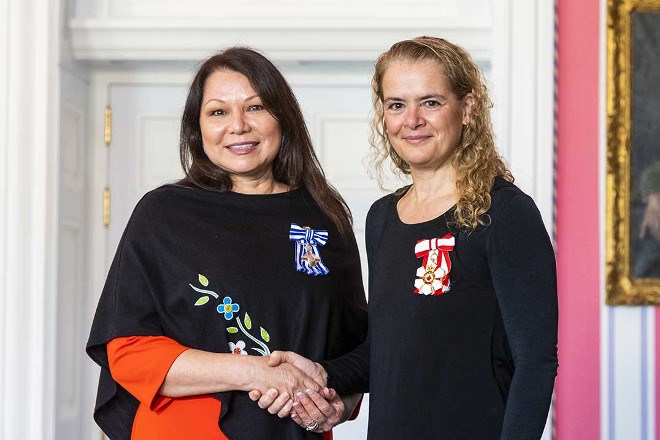 Dawn Madahbee Leach has been recognized for her service to Indigenous economic development with a Governor General’s Meritorious Service Cross.

The first Indigenous woman to lead a regional financial lending institution, Madahbee Leach has had a positive impact on the quality of life and economic well-being of Indigenous Canadians within her community and across the country.

Madahbee Leach has served as general manager of the Waubetek Economic Development Corp. since 1989, where she has overseen millions of dollars of investments in Indigenous businesses and has helped establish community development projects throughout Northern Ontario.

She has served on a number of boards and committees, including for the Northern Policy Institute, the Northern Ontario Heritage Fund Corp., and the Ontario Development Corp. Madahbee Leach has also served on council for her home community of Aundeck Omni Kaning First Nation on Manitoulin Island.

Most recently, through her role at Waubetek, Madahbee Leach has helped launch the Aboriginal Mining Strategy for North-East Ontario, whose aim is to develop Aboriginal mining industry knowledge, build relationships, engage the Aboriginal skilled workforce, and promote Aboriginal business partnerships.

As part of the strategy, Waubetek launched the Association of Indigenous Mining Suppliers in Toronto in March, during the 2019 convention of the Prospectors and Developers Association of Canada.

Madahbee Leach was awarded the Meritorious Service Cross on Aug. 2, 2017, and was invested by Governor General Julie Payette on March 26, 2019 in Ottawa.

Indigenous businesses need support during pandemic crisis, says national leader
May 1, 2020 5:00 PM
Comments
We welcome your feedback and encourage you to share your thoughts. We ask that you be respectful of others and their points of view, refrain from personal attacks and stay on topic. To learn about our commenting policies and how we moderate, please read our Community Guidelines.