East-West Tie could groom a generation of Indigenous skilled workers 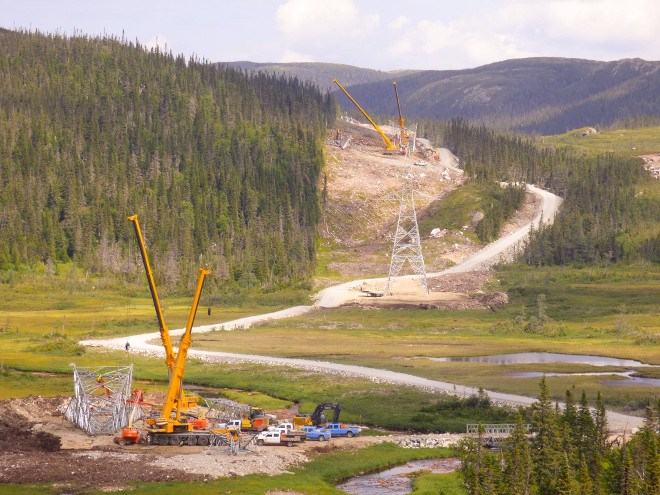 Valarde crews work on a transmission line project in the Long Range Mountains of Newfoundland.

Next year’s start of construction of the East-West Tie Transmission Project will be a “huge win” to enable Indigenous communities on the north shore of Lake Superior to recruit and grow a homegrown skilled workforce.

“I think everyone’s eyes are going to open,” said Red Rock Indian Band councillor Matthew Dupuis, a director for SuperCom Industries, which is partnering with the project’s lead contractor.

Supercom is a contracting and training joint venture run by six First Nation communities across whose traditional land the power line upgrading project will cross.

Its mandate is to maximize First Nations involvement in the $700-million corridor project by supplying skilled labour, negotiating service and supply contracts, and cultivating business partnerships.

In mid-December, East-West developer NextBridge Infrastructure selected Valard Construction as the general contractor to build the 450-kilometre-long line between Wawa and Thunder Bay.

The green flag to start construction on the often-delayed power project drops in late 2018 with completion slated for 2020.

It involves clearing the right-of-way for the construction of a double-circuit 230-kilovolt (kV) transmission line, which would parallel an existing corridor.

The upgraded line would provide a bigger pipeline of power to the northwest to ensure a greater reliability of supply and support future industrial growth, especially in mining.

Dupuis said it’s difficult to approximate the employment numbers for the area First Nations since a percentage of Indigenous content was never included in their deal with Valard.

“It was always about providing as many competent and capable bodies that you could bring.”

Peak employment during construction is pegged at 600 to 700 direct jobs.

Factor in service and supply jobs and there could be as many as 1,000.

The project figures to spin off more than $100 million in subcontracts with brush clearing, access road building, work camp maintenance, and environmental and engineering work.

“Each (Supercom) community brought to the table everything they could do, plus which companies are First Nation-owned,” said Dupuis.

“All these companies will be engaged and they will be performing on this project.”

Dupuis said nothing was ever handed to these companies.

“You had to be competitive and competent. Nothing was given. Everybody had to sharpen their pencils (on pricing).”

On the training side, Supercom devised a strategy built around what type of positions will be required.

“Three or four months ago we were wondering if the project was even going to go,” said Dupuis.

“At the same time we were wondering, what if it’s a go and we’re not ready with the employment and training piece set up?

“It looks bad on us. So we said we’re going to take the initiative, push this thing through, and leave the doubts aside. This is project that this region needs. This region is lacking the infrastructure.”

Supercom secured provincial dollars to hire a project coordinator and project administrator to go into the communities last summer and identify barriers to employment.

Supercom training advisors fanned out for engagement sessions in communities between Thunder Bay and the Sault to build awareness of the employment possibilities associated with the development.

It’s been a hard sell at times, Dupuis said.

In the past, talk of coming mega-projects in the North was usually greeted with a healthy dose of skepticism.

“We’ve seen in the region where we train a bunch of people and the project doesn’t happen,” said Dupuis, mentioning the stalled Ring of Fire mines development and the Little Jackfish hydro-electric project near Nipigon.

“Their hearts have been broken in the past.”

With Valard as the lead contractor, there’s now the certainty that the project is a go and jobs will be available.

The current goal is to train 244, but that number is scalable, said Dupuis.

“We’ll recruit and train as many people as we can.”

As of mid-December, 260 had registered for training.

They’ll be assessed using a three-tier approach based on the necessary job readiness skills needed to fill a myriad of positions in electrical, plumbing, carpentry, cement finishing and power line technician.

“It’s going to be a lot of workplace readiness and academic upgrading,” said Dupuis.

“For a lot of people, it’s going to be about getting their first job and getting them accustomed to what it is to be in the workforce.”

The Anishinabek Employment and Training Services, Confederation College and the trade unions all figure to have a role to play in customizing the training for the companies that will be involved.

With dedicated Supercom staff advisors in every band office, Dupuis said it’s a golden opportunity for the unemployed or underemployed to learn a trade or upgrade their skills.

“We have everything in place. It’s one of those things where you can wake up tomorrow and decide what you want to be.

“My only concern is that word isn’t getting out there enough. I hope that everyone in northwestern Ontario takes advantage of this. I don’t want anyone to miss out.”

Dupuis said the East-West tie isn’t the only major regional development in the queue. But he’s hopeful it’s a stepping stone that will spur economic activity and build up the local workforce that encourages retention in companies so that when a project is completed the workers are not laid off.