In the 15 years Stan Wesley has been offering leadership and First Nations cultural awareness training, dozens of people have crossed his path.
Mar 4, 2013 8:40 PM By: Lindsay Kelly 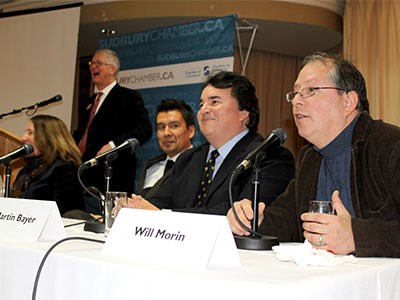 Will Morin, a professor of Native studies at the University of Sudbury, responds to a question during a panel discussion about Aboriginal cross-cultural training hosted by the Greater Sudbury Chamber of Commerce.

In the 15 years Stan Wesley has been offering leadership and First Nations cultural awareness training, dozens of people have crossed his path.

But it’s the young girl from Nibinamek First Nation who waited around, long after his presentation to a youth group had fin­ished, whose image sticks with him.

As she lingered, reluctant to return home, Wesley mulled her future.

“What opportunities exist for children in these communities?” he mused. “Whatever her condition is, it’s not any fault of hers, it’s not the fault of her ancestors, but it’s our collective fault because we’ve collec­tively failed.”

Relations between First Nations and mainstream society need to advance if con­ditions in First Nation communities are going to improve, and change is coming, said Wesley, proprietor of Toronto-based The Wesley Group, during a recent talk hosted by the Greater Sudbury Chamber of Commerce.

Growing protests through the Idle No More movement and a 44-day fast by At­tawapiskat Chief Theresa Spence reflect a growing impatience amongst First Nation communities, he noted.

Living without basic needs like clean water and adequate housing is not what the signatories had in mind when they en­dorsed the treaties with the Crown, he said. The intention was to share in the rewards gleaned from resources on the land.

“It’s humiliating, after a while, having to constantly ask when we know things should have been much different,” Wesley said.

A company’s best asset, when entering a new relationship with a First Nation, is to perform due diligence, said Martin Bayer, a lawyer at Weaver Simmons in Sudbury who specializes in Aboriginal law, natural resources and alternate dispute resolution.

Too often, companies “plunk down” a document before First Nation representa­tives, expecting negotiations to begin, yet it’s the first time they’ve been to the com­munity, Bayer said. Companies should first get to know the people with whom they’re going to be negotiating.

They should learn about the communi­ty’s socioeconomic demographics, such as needs in housing, water and sewer treat­ment, and IT infrastructure, he added.

“If you’re going to be engaging First Na­tion communities, I would really recom­mend you do this kind of due diligence to get a real good sense of the challenges or is­sues facing the communities,” Bayer said. “Because if we’re talking about improving the relationships, if we’re talking about making things better, this is what we’re trying to make better; it’s this picture that we want to change at the end of the day.”

Governance structures differ between territories, and there may be outstand­ing land claims on territories, factors that could affect negotiations, Bayer added. But First Nations also need to do their home­work, educating themselves about a com­pany’s scope of operations, executive and financial statements.

Parties need to work out a process frame­work for how negotiations will unfold and stay in regular contact, Bayer said.

“The easiest part is ratifying the agree­ment, signing the deal,” Bayer said. “But now you’ve got to live together for the next 25 years and how to do you make that re­lationship work? How do you continue to understand one another?”

Some companies are making tolerance a priority. Detour Gold, which is in the pro­cess of opening up a new mine northwest of Cochrane, currently has four agree­ments with Aboriginal communities, 25 per cent employment with Aboriginal peo­ple in the area and more than $400 million in Aboriginal business participation, said Rachel Pineault, Detour’s vice-president of human resources and northern affairs.

Key to Detour’s relationships with near­by First Nations is the implementation of a cross-cultural awareness program that acknowledges communities’ cultural sen­sitivities. Anyone coming onto the mine site, who will be interacting with employ­ees, must undergo a cross-cultural training program. The aim is to break down preju­dices, ingrained perceptions, biases and stereotypes that can prevent understand­ing between cultures.

“It’s not rosy all the time,” Pineault said. “Understanding each other and appreciat­ing each other doesn’t mean you always agree, but at least you understand where the other person’s coming from.”

Implementation of such a program isn’t a one-time process, but one that adapts and evolves based on employees’ needs, she added. At Detour, cultural leave provisions are in place, which allow employees to take time off work to go hunting and fishing, and Pineault relies heavily on local elders to advise her on cultural activities. Detour has hosted fish tastings with elders, goose-plucking contests, evenings in a teepee and a bannock-baking course.

With youthful populations that are grow­ing rapidly, First Nations communities can offer value to the workforce, Pineault added.

Will Morin, a professor of Native stud­ies at the University of Sudbury, believes that ideologies amongst the two cultures aren’t that different. Ancient teachings in the Ojibwe culture are universal, he said, and knowledge gleaned from First Nations teachings is also knowledge gained for non-Native cultures.

The biggest barrier to improving relations, Morin said, is that “there is still hate out there” towards Aboriginal people, and they have a hard time getting people to listen to their point of view. But solutions to many pressing problems can come about if the two cultures are open to collabora­tion.