For the past two summers, Keri Etherington has headed out into the bush in the James Bay Lowlands to collect native plant seeds.
Mar 3, 2016 8:52 PM By: Ella Myers 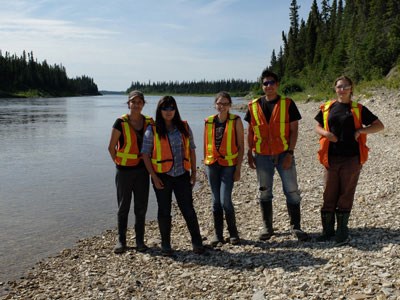 For the past two summers, Keri Etherington has headed out into the bush in the James Bay Lowlands to collect native plant seeds.

“My favourite part of the job was being out on the land every day,” said the environmental technician student, who was raised in Moosonee. “To get to our seed collection spots, we would have to use the boat, helicopter, or four-wheeler, so this was always fun for me. If we were lucky, we would be able to see wildlife.”

The summer program is part of a joint project between De Beers’s Victor Mine and Laurentian University’s School of the Environment, to make native plant species seed available for the restoration of land around the mine.

“The mine is built on Attawapiskat land, and it’s about positive post-legacy,” said Katherine Garrah, a reclamation ecologist for the mine. “It’s one of the agreements we have with the traditional First Nations around Attawapiskat, meeting biodiversity targets, and gaining the security we’ll have with genetically appropriate plants.”

Laurentian’s lead on the project, Daniel Campbell, said most mines bring in a non-native Ministry of Transportation (MTO) seed mix designed for roadwork recovery. However, there is an increasing governmental and scientific push for native plant species.

“It’s about pride in our own landscape and being aware that imported species can get away from us,” said Campbell. Native plant species are more likely to thrive in a climate in which they were bred.

Campbell’s side of the project is driven by protecting and preserving the environment, but he said there are practical economic benefits as well.

“If you know how to fix a landscape, you are more likely to be asked to develop around a community,” said Campbell. “At some point the Ring of Fire will have to use local seed.”

This means the potential for jobs doesn’t stop with the current seed collection.

“We are going to be hiring more people from the communities to support the greenhouse operations post-closure. A lot of the training that we give to our employees will be translatable to an industry outside of mining,” said Garrah.

Etherington said the program is preparing her and her peers for future work opportunities.

“This job was an eye-opener for me. For any student, having De Beers Victor Mine would look good on their resumé. Especially on my resumé, since I would like to be an environment monitor at a mine,” said Etherington.

This project is unique to Northern Ontario, and Campbell said there’s a “vacuum” in research and collection of native plant species in Canada’s Boreal region.

“Those seed collections banks that exist in more accessible regions, they just haven’t been established here. The market demand just hasn’t been there,” said Garrah. “It’s a fly-in operation, which makes transportation around the region very difficult.”

Using native plant species would replace flying in the MTO mix, and while the cost of producing the seed in the North is somewhat higher, Campbell and Garrah both estimate the final cost of using native plant seed will be the same as the current product.

As the project heads into its third summer, Campbell is looking forward. He said a large part of Laurentian’s goal in the project is to develop an online seed catalogue to make available to nearby First Nations communities so seed collection and commercialization can extend beyond the Victor Mine restoration.

“We’re producing research for the site, but not limiting the context to the site,” said Campbell. “Our goal is to encourage local businesses.”

The website will be a non-technical, user-friendly index of plant species that is dynamic and updated frequently. He anticipates they will start with around 50 to 60 species on the site.

Students like Etherington can look forward to more days out in the bush in 2016, and seeing the product of their efforts online in 2017.