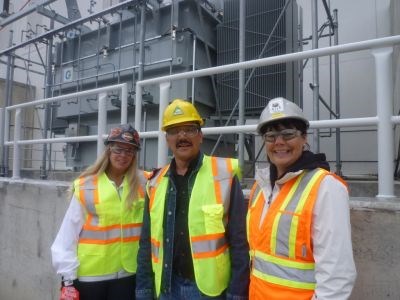 The 28-megawatt project is a collaboration between Ontario Power Generation (OPG) and Coral Rapids Power, a company owned by Taykwa Tagamou Nation. The Peter Sutherland Sr. Generating Station — named for a late community elder — will have the capacity to power up to 25,000 homes.

Work began in late 2014, but the community officially marked the start of the project on August 27. It’s expected to create work for 220 people at the peak of construction, with the completion date scheduled for 2018. Kiewit and Aecon are the contractors for the project.

“We are excited to partner with OPG on this project,” said Taykwa Tagamou Chief Dwight Sutherland. “OPG has a proven track record partnering with First Nation communities. We wanted to work with them on this project, which will provide lasting economic opportunities for the people of Taykwa Tagamou Nation, for this generation and many to follow."

The development will use a portion of the water flowing down New Post Creek to generate electricity by transporting water 250 metres from the intake via a penstock (large pipe) to the power house on the Abitibi River. The remaining water will maintain its natural flow over the falls.

The OPG has indicated roughly 60 per cent of the total labour requirements for the on-site work would be met by the labour market in Northern Ontario. Some Taykwa Tagamou members are receiving training to enhance employment opportunities.

Mining industry leading the way with new COVID-19 rapid-testing technology
Oct 13, 2020 10:00 AM
Comments
We welcome your feedback and encourage you to share your thoughts. We ask that you be respectful of others and their points of view, refrain from personal attacks and stay on topic. To learn about our commenting policies and how we moderate, please read our Community Guidelines.