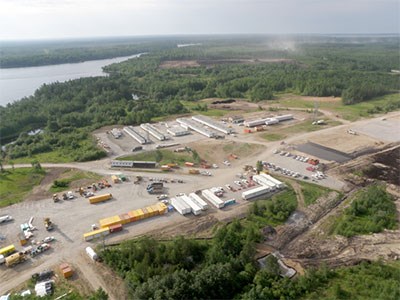 Confederation College has positioned itself to train an Aboriginal workforce to work on the construction of the Little Jackfish hydro-electric project. The college hopes to mirror the Aboriginal involvement at the Lower Mattagami project (above photo) which involved more than 200 First Nation workers.

Industrial development along the north shore of Lake Superior is opening up employment opportunities for area First Nations people.

Thunder Bay's Confederation College is trying to get out in front of the industry's workforce needs in mining, forestry and hydro-electric power construction.

“Everything with respect to development is both good and bad,” jokes Daryl Skworchinski, director of the college's eastern string of campuses in Wawa, Geraldton and Marathon.

Sourcing, training and graduating enough folks to meet the anticipated employment demands of industry is a “moving target” admits Skworchinski, who's held discussions with Stillwater Mining in Marathon on its workforce needs and a new forestry player, Birla, the new owner of the former Terrace Bay pulp mill. “We're certainly responsive to any opportunity out there.”

Confederation is looking to set up training modules geared to local industry.

With labour shortages across the board, the college is taking stock of the available workforce in the northwest through various pre-employment training programs involving First Nation communities.

The anticipated workforce requirements are “massive” and will involve many players coming to the table including the province and federal governments.

“It takes a lot of discussion and time spent doing it,” said Skworchinski.

The training service agreement with Waaskiinaysay will deliver an initiative known as the Little Jackfish Pre-employment Training Program. It involves both essentials skills training and academic upgrading.

The idea is to prepare the communities for employment opportunities geared to the upcoming Little Jackfish hydro-electric project.

Ontario Power Generation is proposing to build a 78-megawatt hydro-electric project on the Little Jackfish River which drains into Lake Nipigon. Area First Nations will be well-represented in the workforce.

In the communities, the college has conducted individual assessments to determine where applicants are academically in relation to the career they want to pursue.

For the Little Jackfish, the construction project and the work camp will require a variety of jobs to be filled such as cooks, carpenters, heavy equipment operators and mechanics, welders, security guards, electricians, plumbers, iron workers, labourers, and office administrators.

“When these people graduate, they're coming out with skill sets that are developed for the industrial world in a mining or mill site, or a hydro project,” said Skworchinski. “And in the trades, there is a huge demand for that skill set.”

The training to go down the carpentry path followings a difficult curriculum. The Certificate of Qualification is heavy in technical math that requires upgrading in math before writing the exam.

“It's meant to be a fact-based approach on the student's goal path and where they need to take these upgrading of skills,” said Skworchinski. “Even for someone who's been in the industry, it's going to require some technical math upgrading.”

With the program scheduled to wrap up March 31, the college has processed about 400 intakes.

Skworchinski said those who have done well have obtained employment at day's end.

“If participants who go into the programming do well, they literally have the world at their feet if they want it.”

The college also works with the Anishinabek Employment Training Services, is a stand-alone organization that Confederation has an agreement with to deliver training services.

Skworchinski has had other workforce discussions with Stillwater Mining on its Marathon PGM project, the Birla Group's pulp operation in Terrace Bay, Barrick Gold in Hemlo and has talked with mining companies operating in the Far North Ring of Fire.

“The model we've developed is a good one. We're trying to come up with a model that isn't solely funding based that can be applied even when a huge government pot of money isn't available.”

Skworchinski is in discussions with Barrick and Stillwater, with interest from around the Wawa area, and had discussions with Premier Gold operating near Geraldton and Birla in Terrace Bay.