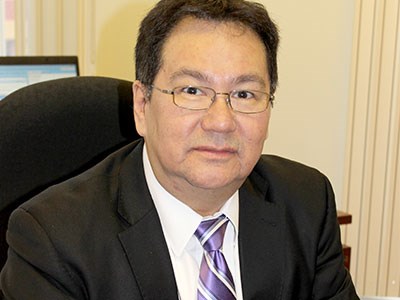 Brian Davey's investment and economic development background will help in his new position as head of the Nishnawbe Aski Development Fund.

Announced in late January, Davey moves up from his position as NADF's special initiatives advisor in the not-for-profit organization's resource services department.

As a well-known figure across a north­western Ontario and Far North landscape that’s now being primed for future min­eral development, no doubt Davey's famil­iarity with the scope of the work ahead came into consideration for his appoint­ment.

“I’m sure it was one of the things they (the board of directors) took into consid­eration when I made a bid for this posi­tion,” said Davey.

He fills the spot left vacant when his predecessor, Harvey Yesno, went on leave in 2011 to take a job with the Ontario government.

Previously, Davey served six years as deputy grand chief for the Nishnawbe Aski Nation, was economic development manager with the Matawa Tribal Council for four years, and was a managing part­ner with First Nations Equity, a private investment banking firm in Toronto.

Born and raised in Moose Factory, Dav­ey takes the job at a time First Nations are demanding a greater say, and want to par­ticipate, in resource development on their traditional lands, all amidst the backdrop of the national Idle No More movement.

“The stars are definitely lined up,” said Davey. “It makes this position very oppor­tune to be in at this time.

“You get the public consciousness about rights issues, the Ring of Fire develop­ment, and the overall movement in the leadership across Canada, particularly in Northern Ontario. It's a good spot to be in.”

Among his stated goals, Davey wants to build a culture of Aboriginal entrepre­neurship and assist in business capacity and strategic planning in many of the 89 First Nation communities that the organi­zation serves.

As a community futures organization in 2002, NADF stands to to play a vital role in community economic development, espe­cially in the Far North.

With Aboriginal people creating new businesses at a faster rate than the rest of Canada, Davey is proud of NADF's ac­complishments to date in providing $30 million in loans across Northern Ontario, and creating 2,000 jobs and 545 businesses.

Davey finds there is a “gung ho” atti­tude in the communities toward mining, with many folks wanting to get involved in the business spinoffs.

“They don’t necessarily want to work in the mine itself, but they want to be part of a business that’s taking advantage of those opportunities.”

For those on the periphery, there are opportunities in catering, winter road construction and maintenance, camp construction, fuel hauls and in the explo­ration and mining supply sectors.

Davey wants to beef up his business support and create an equity fund for en­trepreneurs and community-based orga­nizations.

“We think there are investors out there that want to take part in opportunities related to the Ring of Fire, and this is a vehicle that allows them to participate.”Davey intends to expand the loan divi­sion, currently sitting with $13 million in assets. “My vision is to be at $60 million in six years.”

That can be accomplished, he said, “by getting out there and doing more business and becoming more efficient with the resources that we do have inter­nally. We think there’s enough coming down the pipeline in opportunity that there’s no excuse we can’t be up there.”The organization has several initiatives planned for 2013, including its Strategic Mineral Exploration & Mining Training Course scheduled for April 8-12 in Thun­der Bay, and the third annual Mining Ready Summit on October 16-17 in Tim­mins.

Davey said these events can be the spark for fledging entrepreneurs that starts ma­ny Aboriginal-owned companies, which often spring up through partnerships and leads to eventual ownership.

Some deals are small joint ventures, while others team up with large Aborigi­nal companies like the Wasaya Group or Cree Construction, owned by the James Bay Cree of Northern Quebec, one of the largest contractors in Quebec.

“The value of forming partnerships is you have access to top management and those people with a track record. But you have to have a structure that makes sense and that you’re not just window shopping for a type of corporate structure. You’ll actually own a share of the assets or will move toward owning a large portion. There’s got to be that type of plan for us to get involved.”