Sales for Birch Bark Coffee Company have skyrocketed since spring launch
Nov 5, 2018 8:00 AM By: Lindsay Kelly 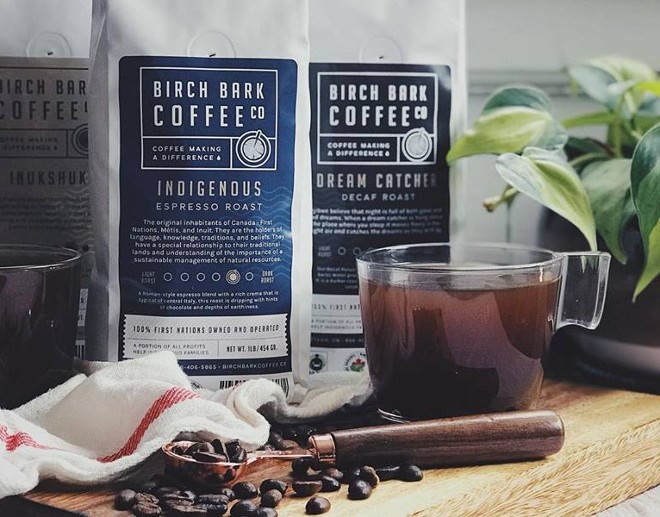 Proceeds from the sale of Birch Bark Coffee will go toward the purchase of water purification systems, which will be installed in Indigenous homes that have been impacted by boil water advisories. (Supplied photo)

The last seven months have been an extended crash course in social entrepreneurship for Mark Marsolais-Nahwegahbow.

Since establishing Birch Bark Coffee Company last spring, the Birch Island entrepreneur has followed a path strewn with a lot of hard work, a little luck, a few challenges, and valuable insight. But through the process, Marsolais-Nahwegahbow has stayed true to his dream of a world in which every Indigenous person in Canada has access to clean, potable water.

“I'm trying to make a difference, and I'm trying to show people that companies such as the one I built with Birch Bark want to make some changes and want to inspire other entrepreneurs to follow suit,” he said during an Oct. 30 presentation at The Foundry, housed in the Jim Fielding Innovation & Commercialization Space at Laurentian University in Sudbury.

Birch Bark Coffee Company – which takes its name from the founder’s home community, located within Whitefish River First Nation – produces a line of organic, fair-trade, freshly roasted coffee blends. All proceeds from sales go toward the purchase of water purification systems, manufactured in Canada by Can-Am Wellness, which will be installed in Indigenous homes impacted by boil water advisories.

At the outset of his journey, Marsolais-Nahwegahbow figured he’d sell some coffee and start installing the purification systems right away. But the business took off so quickly, he said, he’s had to slow down and re-evaluate his business plan to ensure its long-term viability.

If the coffee doesn’t sell, he can’t buy water purification systems, and the communities won’t benefit, he reasoned.

“I'm committed to creating an environment that's inspiring and supportive for aspiring entrepreneurs,” he said. “And I'm trying to create a new movement with this business that's really unique. I'm trying to change the way we look at business.”

Partnerships have played an essential role in laying a solid foundation for the company.

Shortly after launching, Marsolais-Nahwegahbow connected with the founders of Canadian ecommerce company Shopify, who approached him about collaborating on promotion and sales. Since then, demand for his product has taken off – he averages $7,000 to $10,000 in monthly sales, something he said is “unheard of” for a coffee startup. The product has been shipped as far as Hawaii and Jamaica, and the list of retail outlets stocking his coffee is growing.

Working with Halifax-based Just Us!, the third largest coffee roaster in the Atlantic, he’s sourced coffee beans produced by other Indigenous communities around the world, some of which still husk the beans by hand, using traditional methods. It was important to Marsolais-Nahwegahbow to pay homage to coffee’s Indigenous origins.

A team of herbologists is experimenting with coffee infused with the essential oils of traditional Indigenous medicines like sweetgrass and sage, while Ridge Rock, a new Ottawa-based brewery, is using Birch Bark as a base to create their first cold brew coffee.

In the future, Marsolais-Nahwegahbow would like to switch to more sustainable packaging to reduce the products’ impact on the environment. He’s already moved to a smaller-sized format from his original one-pound bags to reduce waste.

“We switched down to 12-ounce bags because of a market survey that showed that… the purchasing of food is weekly,” he explained. “A pound of coffee just sits in the cupboard and goes rancid, so now they've found that 12-ounce bags actually go faster because they're used up more quickly.”

There are already plans to expand the line beyond the current five blends. Marsolais-Nahwegahbow is planning to release a sixth blend, to be called "Two-Spirited," the proceeds of which will go toward educational initiatives to support LGBT2Q+ communities.

Next April, the country’s capital will host the inaugural Ottawa Coffee Fest, where roasters, baristas and coffee companies will gather to celebrate their favourite steamy beverage, and proceeds from the one-day event will go directly to Birch Bark Coffee Company.

Marsolais-Nahwegahbow is appreciative of the support his fledgling venture has received to this point, and he recognizes he still has a long way to go. Yet his vision of clean water for Canada’s Indigenous people has never been clearer.

“The main thing that drives me is that I can’t wait to see the smiles on the people’s faces, especially the kids, the families, so I’m excited to do it,” he said. “It’s a big wish list. But I’ll do it.”