Aboriginal excellence to be honoured at PDAC

In the early days of the Klondike Gold Rush, Tagish prospector Skookum Jim was known for his perseverance and tenacity.
Feb 28, 2013 7:52 PM By: Lindsay Kelly 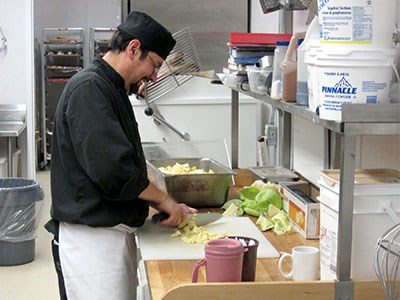 Marcel Boucher, an assistant chef with Windigo Catering, prepares food for employees at Goldcorp.'s Musselwhite Mine located northwest of Thunder Bay. The Sioux Lookout-based company has been providing catering services since 2005.

In the early days of the Klondike Gold Rush, Tagish prospector Skookum Jim was known for his perseverance and tenacity. The same attributes could easily be bestowed on Windigo Catering, which will receive an award named for the 19th-century miner at the Prospectors and Developers Association (PDAC) in March.

Windigo is the 2013 recipient of the PDAC’s Skookum Jim Award, which acknowledges Aboriginal achievement in the mining industry. It’s the first such accolade for the catering and janitorial service company based in Sioux Lookout, but likely won’t be the last.

In the last year, the company has continued to excel in its role providing catering and janitorial services at Goldcorp’s Musselwhite Mine northwest of Thunder Bay. Now the company is poised for growth, an exciting prospect, but one that’s slightly daunting, said Debbie Korobanik, general manager of Windigo’s parent company, Windigo Ventures General Partner.

“We’re just trying to keep the growth at a level where it’s still manageable,” Korobanik said. “Sometimes I worry about that. There’s lots going on.”

Seeking to expand its reach beyond Musselwhite, Windigo has bid on a number of contracts, big and small. It was successful in securing a three-year janitorial contract with Thunder Bay’s police station, but wasn’t as fortunate in bidding on other contracts. Korobanik is unruffled.

Windigo was kept busy last summer when it won a sub-contract at Lakehead University, which took in flood victims at its residences. Korobanik was impressed with the management skills employed by her janitorial supervisor who often had just 12 hours to find 10 employees who were available to clean.

The company’s immediate goal is to expand into Thunder Bay, but finding a building that’s appropriate for catering has been a challenge.

“There are a lot of old buildings in Thunder Bay, and the cost of constructing is expensive, so we went back to our business plan and said maybe we’ll just look at a lease for a few years and start there,” she said. “So that’s what we’re doing now.”

Feb. 1 marked the grand opening of its retail outlet in Sioux Lookout, which is open to business and residential customers.

“Instead of ordering the more common supplies, such as paper products—toilet paper, hand towels—they can just run into the store and grab a few cases and get back to work,” Korobanik explained.

She’s also hoping to build on last year’s success supplying to companies accessible by winter road. Because the road closed early last year, it was difficult for remote communities to get their supplies, which kept Windigo hopping, Korobanik said.

With all the activity, the company has had to hire six new staff in Thunder Bay, as well as two staff for Windigo Distributors, and Korobanik’s so busy, she’s getting an assistant. A full 83 per cent of its employees are of First Nations descent.

Some of the staff from Musselwhite will be in attendance during the PDAC convention when Windigo receives its award, because they are integral to why the company is being recognized, Korobanik said.

Though the company’s unaccustomed to receiving this kind of attention, she said staff are excited about the opportunity to attend.

“I’ve never attended the PDAC convention,” she mused. “I understand it’s quite an affair, but I’m looking forward to that.”