In business for more than a century, Steinberg & Mahn has served generations of men
Dec 4, 2020 12:46 PM By: Lindsay Kelly 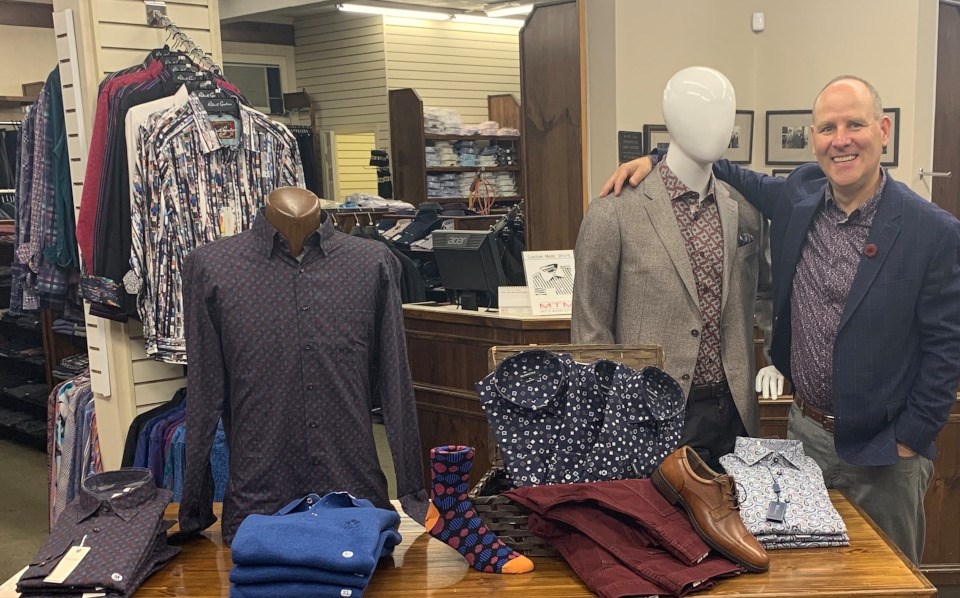 When COVID-19 shut down most of the province in March, the Timmins District Hospital was forced to cancel its yearly golf tournament, which was slated to raise thousands of dollars for badly needed equipment for the health centre’s mammography unit.

Not content to stand by and let the hospital go without, Taylor launched a fundraiser at his downtown menswear shop, Steinberg & Mahn, selling reusable masks, and donating $2 from every sale back to the campaign.

To say it’s been a success is an understatement.

“We’ve been very fortunate,” Taylor said. “We have donated $2,000 already, and we’re going to have another donation by the end of this month. So, we’ll be donating $5,000 back to the mammography unit at the hospital.”

That enduring generosity, tied to a steadfast allegiance to the community, has been a hallmark of Steinberg & Mahn through its rich 101-year history.

Launched by Taylor’s great-grandfather, Max Steinberg, and his partner, Joe Mahn, in 1919, the apparel store rose out of opportunity.

After immigrating from Germany seeking work, Steinberg found his niche selling apparel – suits, ties and hats – to workers in the area who had arrived in Timmins to take jobs in the mining and lumber camps. Men’s attire was a lot more formal in those days.

Since then, a representative from each successive generation of the Steinberg family has taken a turn at the helm: Max’s son, Eli, was the first to follow in his footsteps, before his son, Don, took over.

Taylor joined the family business in the 1990s, yet it was the last thing he expected to do.

“When I left here out of high school, I wanted nothing to do with Timmins, nor the business,” he chuckled. “But I guess it took me a while to grow up and realize what I had.”

At that time, Taylor recalled, baggy pants and big shoulder pads were all the rage.

Always evolving, men’s fashion is now more casual, and most clients who visit his shop are more likely to sport slacks and a patterned shirt, complemented by a signature jacket.

Though the business has done well over the years, it hasn’t been without its challenges, big box stores and online shopping among them.

But perhaps none has had as great an impact as the arrival of COVID-19.

“Trade is a little different this year,” Taylor said. “It’s been very challenging.”

Reopening post-shutdown, Steinberg & Mahn saw a trickle of curbside pickup business return, but mostly men were just stocking up on the basics: underwear and socks.

With fewer people venturing away from home, there was less need to replenish their wardrobes, although the summer’s warm temperatures did attract shoppers in search of shorts, T-shirts, and swimsuits, Taylor noted.

Thanks to good working relationships with his suppliers, he was able to adjust his inventory and meet the demand.

Gone entirely was the business tied to the bigger, more formal events, like weddings and funerals, when a man might need a beautifully tailored suit and tie.

“What really helped, especially here in Timmins, we were very lucky to have some graduation business,” Taylor noted, as local schools held individual, socially distanced “ceremonies” for their graduates.

“It was really, really special.”

Personal relationships, developed over years serving his clients, are what sets his business apart from bigger retailers, Taylor noted.

It’s not uncommon for him to assist generations of men whose fathers before them have frequented his shop.

“We go through how the family is, what’s going on, and we may spend 20 minutes talking about our families before we get to business,” Taylor said.

“There’s zero relationship when you’re dealing with somebody on an e-commerce-type level.”

At these established enterprises, customers appreciate the personal attention, along with the opportunity to feel a garment’s fabric and try on a shirt or pants to ensure the fit’s just right.

Despite being competitors in the business, Taylor said, they help each other out when they can.

“There are only a handful of us in the North,” he noted. “We’re all happy for each other’s success and we want each other to succeed.”

Still, he recognizes that, as customer demand changes, the business must adapt in response, and setting up an online shopping portal is next on his to-do list.

Despite all that’s happened, Taylor said he’s seeing a glimmer of hope as business starts to pick up.

Timmins’ low infection rates have enabled the community to open up more, and events that were previously cancelled are being rescheduled for this coming year.

Taylor is optimistic that he’ll soon see a return of customers, and the shop, ever-resilient during its century-plus history, can weather this storm, too.

“We’re not sinking,” Taylor said. “We’re holding our own.”

This article is one in a series focused on the rich histories, journeys and long-term successes of generational businesses in Northern Ontario.

Reliable Maintenance has been keeping the North clean for more than 60 years
Feb 5, 2021 12:30 PM
Comments

This story was made possible by our Northern Ontario Business Leaders Program partner.

Thank you to Sunwire for helping to expand local news coverage in Northern Ontario. Learn more