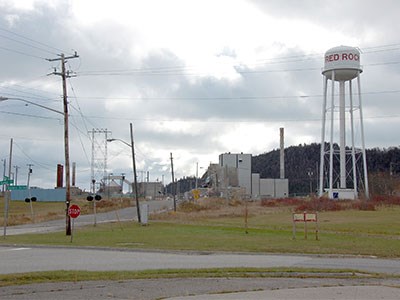 An Orillia demolition company was slapped with a major fine after one of its workers was injured during the collapse of a building at the former kraft paper in Red Rock.

A numbered company operating as SL Marketing pleaed guilty and was fined $81,250 fine (including the required 25-per-cent victim fine surcharge) by Justice of the Peace Jennifer Neill in provincial court in Thunder Bay.

According to a Ministry of Labour news release, SL Marketing was conducting demolition operations at the former kraft paper mill in the northwestern Ontario town on Nov.14, 2017.

After site orientations were performed, workers drilled holes into columns in three concrete structures on site and inserted explosives into the holes. Under a supervisor’s direction, they were detonated as test blasts.

The blasts did not bring the structures down, and the site was then left for several days to settle.

Following that, an excavator with an attached pulverizer was brought to the site. The operator was instructed to "soften" one of the structure's walls using the pulverizer. The intention was that after the walls had been softened, a further blast would be set off to bring the structure down.

The worker began softening the walls and a 65-foot concrete structure collapsed on top of the excavator. The worker was trapped in the excavator's cab for several hours, buried under rubble. He was later freed, taken to hospital with a non-life-threatening injury.

The ministry investigated the incident and determined that even though the company had trained its workers in how to perform demolition work, a required second assessment had not been performed following the initial test blast to determine the building's structural integrity.

As a result, the company did not provide an appropriate safeguard (the second assessment) in the circumstances to prevent injury to a worker.

This contravened section 212(1)(b) of the Construction Projects Regulation (Regulation 213/91) and  the company failed, as an employer, to ensure that the measures and procedures prescribed were carried out in the workplace, contrary to section 25(1)(c) of the Occupational Health and Safety Act.

OPINION: Critical mineral supply chains essential for economic development opportunities
May 27, 2020 1:00 PM
Comments
We welcome your feedback and encourage you to share your thoughts. We ask that you be respectful of others and their points of view, refrain from personal attacks and stay on topic. To learn about our commenting policies and how we moderate, please read our Community Guidelines.