There is no question who is slowly euthanizing the greatest of all Canadian passenger trains, the world-renowned Canadian on the Toronto-Sudbury-Vancouver route. It’s former Crown corporation Canadian National (CN).
0
Aug 28, 2017 10:00 AM By: Guest Columns 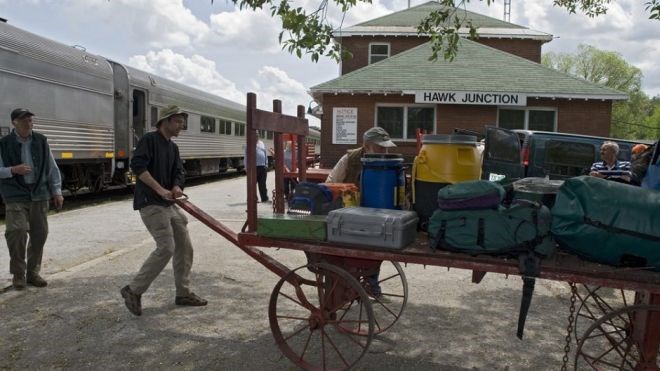 Photo courtesy of the Coalition for Algoma Passenger Trains (CAPT)

To paraphrase a 1978 comedy-mystery film, “Who is killing the great trains of Canada?”

The cast of characters is lengthy. Start with Liberal and Conservative governments, which have seen no value in a modern rail passenger system since VIA Rail was launched the same year as that movie.

Cue the fresh-faced Ottawa policy advisers whose credentials include rail-relevant work in cosmetics marketing; I kid you not. Add a dash of hostility by airlines and bus lines that want VIA’s subsidy diverted to their accounts.

But there is no question who is slowly euthanizing the greatest of all Canadian passenger trains, the world-renowned Canadian on the Toronto-Sudbury-Vancouver route. It’s former Crown corporation Canadian National (CN).

Since it was privatized in 1995, CN has been extending the length of its freight trains, but not keeping pace by extending the sidings where opposing trains can “meet” each other or slower ones can be overtaken by faster ones, such as the Canadian. As a result, many CN employees now joke about the Canadian owning those short sidings.

When this started more than a decade ago, CN compelled VIA to add a night to the Canadian’s schedule, making it slower than it was in the days of steam locomotives and ice-cooled coaches. Its performance improved briefly, but is now at its lowest level ever, with only one in four trains arriving in Toronto or Vancouver as scheduled in 2016.

In recent months, the Canadian has arrived in Toronto up to 20 hours late.  This throws people’s travel plans into disarray and drives VIA’s costs through the roof.  Because of the lengthened schedule CN foisted on VIA in 2009, the latter doesn’t have enough cars to assemble an extra train in Toronto when the eastbound train arrives late from the West.

This delays the westbound train’s departure and inconveniences hundreds of passengers clear across the country, including many waiting at the unstaffed stations in places such as Gogama, Hornepayne, Armstrong and Nakina.

For example, the Canadian scheduled to depart Toronto on the evening of Aug. 1 left nearly 13 hours late on Aug. 2 because it required the equipment and crew from the inbound train.  It lost more time as it rolled west, finally arriving in Vancouver nearly 22 hours late.

Despite this brutalizing of the Canadian’s schedule, it remains incredibly popular.  Known worldwide as the last of the great streamliners, it attracts passengers willing to pay up to $9,000 per couple for luxury sleeper space in the summer. With the Canada 150 Youth Pass VIA offered this summer, its low-cost coach ridership has jumped more than 40 per cent.

But there has been considerable grumbling on social media by passengers in all classes of accommodation. Many have said this will, indeed, be a “once-in-a-lifetime experience” because they won’t ride the Canadian again.

The solution is quite simple: Ottawa needs to call CN to account. It has the power to do so, especially since CN was relieved of the obligation to provide this service when VIA was created.  As well, CN receives more than $6 million annually to do little more than allow the train known as the Silver Lady on its tracks.

If you ask Transport Minister Marc Garneau to explain this, he’ll send you this boilerplate answer: “VIA is an independent Crown corporation that operates at arm’s length from the Government of Canada and reports to Parliament through the Minister of Transport. My role is to determine the broad policy direction of the corporation while respecting its operational autonomy.”

Meanwhile, just south of the border, Amtrak’s Empire Builder between Chicago and Seattle rolls along daily in both directions on a railway flooded with long freight trains, just like CN. It usually runs on time or only a few minutes late, and it is frequently early.

Not to encourage publicly funded junkets, but Garneau and his advisers might ride the Empire Builder to find a fix for the Canadian. They’d learn it is possible to run both passenger and freight trains on the same line and ensure passengers are treated as well as, or better, than carloads of lumber, grain and crude oil.

Of course, if the Canadian’s reputation, marketability and public utility are destroyed, travellers will have the option of taking their vacation bucks south to ride the Empire Builder.

“Sunny ways, sunny days,” as they say in Ottawa.

Greg Gormick is a Toronto transportation writer and policy adviser. His clients have included CP, CN, VIA and numerous elected officials and government transportation agencies.