From Smiths Falls up to Pembroke, and further west up the Ottawa Valley to North Bay and Sudbury, runs a historic railway line – an eastern segment of the Canadian Pacific Railway's original transcontinental main line connecting Montreal with western
0
Apr 5, 2010 1:48 PM By: Roderick Taylor 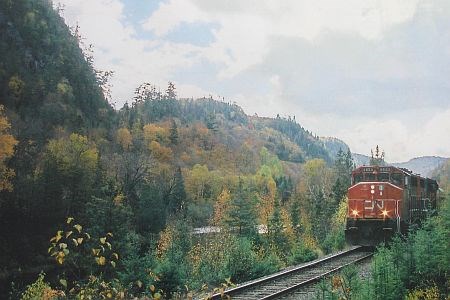 From Smiths Falls up to Pembroke, and further west up the Ottawa Valley to North Bay and Sudbury, runs a historic railway line – an eastern segment of the Canadian Pacific Railway's original transcontinental main line connecting Montreal with western Canada and the Pacific. For more than a century, those tracks regularly bore the weight of lengthy, heavy freight trains, not to mention iconic passenger trains of yore, like The Dominion and The Canadian.

Lately, however, much of the historic route, together with other rail lines in the region, have fallen rather silent, a victim of the recent, sharp economic downturn that significantly impacted rail traffic volumes in Ontario and across the rest of Canada and North America. While a modest recovery would seem to be under way, the hemorrhaging of rail traffic during the downturn has left many regional and short lines, in particular, struggling to survive.

Under immediate threat of possible abandonment is the stretch of CP's former main line from Smiths Falls to Mattawa – partly the result of that company's recent decision to redirect Montreal to western Canada through freight traffic away from the Ottawa Valley and through Toronto instead. The lines between Sudbury and Sault Ste. Marie, and between Ottawa (Nepean) and Pembroke are under similar threat.

Needless to say, if these rail line abandonments proceed, it will leave great swaths of Eastern and Northern Ontario bereft of rail service – freight or passenger. That will have detrimental, long-lasting economic consequences. For example, there are many industries that will not consider locating in a community that does not have rail line access.

What to do? For starters, a raft of municipalities along the rail lines in question, aware of the consequences of inaction, are pressing the federal and Ontario governments to help avert the line closures and provide financing required to upgrade the various lines to standards permitting of reasonable train speeds (there are stretches of track that are in a poor or questionable state of repair as a result of deferred or inadequate maintenance over the years).

Such an upgrade would also make operation of the lines a more attractive proposition to potential buyers, specifically, short line companies. To those who would object to bailouts to the rail lines from the public purse, it can be easily argued that the rail lines are, in a sense, owed such financial support as compensation for the millions of dollars in property taxes that have been extracted from them over the years for essentially nothing in return in the way of government services.

But I think we can go a step or two further. Instead of merely rescuing these transportation links for the valuable conduits for freight conveyance that they are, why not have all of the endangered trackage stretching from Ottawa to Sault Ste. Marie – transferred to VIA Rail and upgraded to passenger train standards. This would provide a speedy, daily passenger train service along the length of what certainly has to rank as one of the more important transportation corridors in all of Canada - Montreal through Ottawa and Sudbury to the Sault.

I think this would make eminently good sense. Save for the eastern stretch of this corridor from Montreal to Ottawa, coincidentally also largely owned by VIA Rail, so a westward extension of VIA ownership would be a logical step. This corridor is presently largely bereft of rail passenger service. Yet, given the considerable sizes of the cities en route – Sault Ste. Marie, Sudbury and North Bay, with populations of about 75,000, 158,000 and 53,000 respectively, ideally spaced for effective service by the rail, along with significant secondary centres such as Blind River, Espanola, Sturgeon Falls, Mattawa, Petawawa, Pembroke and Ottawa's fast-growing western suburb of Kanata, an excellent case can surely be made that this corridor stretching from and including the major eastern terminal and destination points of Ottawa and Montreal, warrants at least a basic, daily passenger train service throughout its length.

Such are the population concentrations along this corridor – higher than many of VIA's existing routes – that it can be argued the rail passenger service that once plied this corridor some 30 years or so ago, should never have been terminated in the first place.

Here is a golden opportunity to directly reconnect both Ottawa and Montreal to their natural economic and geographic hinterlands of the Ottawa Valley and beyond with speedy, environmentally-friendly intercity rail transport. Daily morning departures, both eastbound and westbound, from the Sault and Montreal, would furnish residents of the former with same day in and out service to both Sudbury and North Bay, with additional rail and bus connections to Ontario points north and south at each.

Very importantly, given long-term rail freight traffic growth trends, it is highly likely any potential buyer/operator of the Ottawa Valley rail corridor would derive considerable revenue from running rights exercised over the route by CP or CN or both as a result of growing rail traffic capacity constraints on rail lines through Toronto.

In short, rehabilitation and upgrading of the Ottawa Valley rail corridor could prove to be a very shrewd long-term economic investment in more ways than one.


Roderick Taylor is a freelance writer who has written on rail transit topics for magazines and newspapers for 15 years.