When Ron Common says he wants students to graduate declaring “Sault College changed my life,” it’s more than just a public relations scheme. There’s sincerity in his words, and Common has the tangible results to back them up.
0
Oct 24, 2013 6:00 PM By: Lindsay Kelly 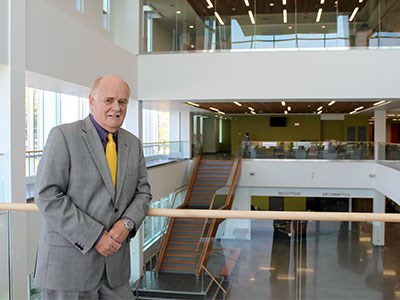 Retired Sault College president Ron Common has overseen a building boom over six years with more than $100 million worth of new campus construction.

When Ron Common says he wants students to graduate declaring “Sault College changed my life,” it’s more than just a public relations scheme. There’s sincerity in his words, and Common has the tangible results to back them up.

Through six years at the helm of the Sault Ste. Marie school, Common has undertaken a capital campaign worth $6 million and overseen the construction of more than $100 million worth of new buildings on campus, including a $25-million academic building, a $12.5-million health and wellness centre and an aviation training centre.

Partnerships have been forged with the city’s top employers—Essar Steel Algoma, Tenaris Algoma Tubes, Extendicare and Algoma Public Health among them—to offer co-op placements to students enrolled in related programs, and many have contributed to the capital campaign.

Programs of study have been added, and

enrolment numbers show that’s paid off. First-year enrolment has increased by six per cent, and waitlisted programs have more than doubled since 2010. Thirty-two per cent of the student population relocated to Sault Ste. Marie from other parts of the province to attend college in the

Overall, enrolment is up two per cent in all years across the college. Since 2008 the college has grown by 32 per cent.

All this has been orchestrated in consideration of the students.

Common arrived at Sault College in 2007, already having spent close to four decades in education. It quickly became apparent that the aging infrastructure needed upgrades to attract students to campus and meet their needs.

Common said. “And I felt that we had to add a number of new programs in order to achieve that objective.”

With the recommendations of its advisory committee, the school has developed programs whose graduates will help meet industry needs, which Common is optimistic will curb the outmigration of youth. Preventing students from leaving the Sault, the Algoma region and the North in general is a priority, he said, since many students who leave don’t return.

Advancing education in Aboriginal communities has been a lifelong interest for Common, whose adopted siblings, a brother and a sister, are both of Aboriginal descent, and who spent the formative years of his teaching career working in First Nations communities, often setting up school systems there.

resource, he said, and Common is eager to see

Aboriginal student success numbers equal those of non-Native populations. The college is currently reviewing its policies and messages to ensure “we are as inviting as possible, especially for the Aboriginal students.”

At the end of November, Common announced his retirement, effective Dec. 31, 2013, after 45 years in

education. But he’s planning to fit a lot into his last year.

He wants to start the final of five initiatives outlined in the school’s 10-year strategic plan, which would establish an Institute of Energy and the Environment by 2022. He’s also excited about the Study North initiative, which will bring together the six northern colleges to strategize about how to encourage southern Ontario students to come north to study.

Northern Ontario is Common’s home now, and he’ll remain in Sault Ste. Marie during his retirement years. He’s looking forward to spending more time with his family, including his first grandchild, which arrived last fall.

But that doesn’t mean his hands will stay idle

for long. He’s already planning out how he can continue to contribute to the community beyond his current role.

“A year gives me time to try to figure out the next stage of my life, which certainly is not

going to involve golfing and travelling,” Common chuckled. “I have to find some way to make a